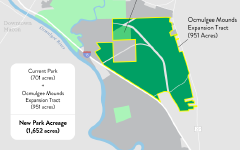 The newly protected 951-acre property is located adjacent to the park and inside the city limits of Macon. The property was under threat of incompatible industrial development before OSI negotiated a deal to purchase the land in 2021. The project is the result of a major expansion of the park in 2019, quadrupling the authorized boundary from 701 acres to more than 3,000 acres, setting the stage to expand a unique urban park that tells the story of 17,000 years of continuous human habitation of the Ocmulgee basin.

With the protection of the property, 906 acres will be immediately transferred to the National Park Service (NPS) as an addition to the park. Meanwhile, the remaining 45 acres will be transferred to the Ocmulgee Land Trust, which will hold the land while wetlands restoration occurs, and then donate it to the NPS. The Open Space Institute negotiated the contracts and managed the transactions until transfer to NPS and Ocmulgee Land Trust.

The newly acquired property is located to the east of the previous park boundary and situated within the “Ocmulgee Old Fields,” also known as the Macon Reserve, a three-by-five-mile site revered as a sacred place to Muskogean people. The Ocmulgee Old Fields-Macon Reserve is comprised of lands specifically retained by the Muscogee (Creek) Nation from 1805 until the 1826 Treaty of Washington, which in addition to other treaties culminated in removing the Muskogean people from their ancestral home to present-day Oklahoma.

“This additional property includes some of our most important unprotected ancestral lands. The Muscogee (Creek) Nation have a long-standing history of preserving the Ocmulgee Old Fields-Macon Reserve. We have never forgotten where we came from and the lands around the Ocmulgee River will always and forever be our ancestral homeland, a place we consider sacred and a place with rich cultural history,” said David Hill, principal chief of the Muscogee (Creek) Nation.

“It is our solemn duty and honor to protect our nation’s most significant lands. It’s even more critical that we work collaboratively with Tribal nations to ensure proper conservation and access. The National Park Service will continue to work with willing sellers to preserve the culturally significant land associated with the Ocmulgee Old Fields,” said National Park Service Director Chuck Sams.

“Our gratitude to all who worked on one of the most significant projects in Middle Georgia’s and our country’s history is hard to put into words,” said Chris Sheridan, board president of the Ocmulgee National Park and Preserve Initiative. “To the landowners and partners who want to see their land put to its highest and best use, and to the donors whose farsightedness and generosity are unmatched, the stewards of these sacred lands we call home are forever grateful.”

'With this transaction, we are ensuring its permanent protection and acknowledging the Muscogee (Creek) Nation’s historic and ancestral connection to this hallowed place.' - Kim Elliman, OSI

“OSI is proud of our role in the protection and expansion of Ocmulgee Mounds National Historical Park,” said Kim Elliman, president and CEO of OSI. “This land is incredibly special, holding history dating back thousands of years. With this transaction, we are ensuring its permanent protection and acknowledging the Muscogee (Creek) Nation’s historic and ancestral connection to this hallowed place.”

The park contains some of the most significant Native American mounds in North America and was the largest single archeological excavation in American history, producing more than two million artifacts, in the 1930s. The park’s striking mounds are marvels of highly skilled Indigenous engineering, that today constitute one of America’s most important cultural landscapes. Seven of the mounds can be found at the park, including the 55-foot-high Great Temple Mound, located on a high bluff overlooking the floodplain of the Ocmulgee River. The Muskogean people who built these mounds spoke unique dialects reflecting lingual divergence from other tribes more than 3,000 years ago, making Muskogean — which is still spoken today — the only truly native southeastern language.

Efforts to protect the park would not be possible without the partnership of the Ocmulgee Land Trust, National Parks Conservation Association, The Nature Conservancy, and Georgia Conservancy.

The newly acquired land will initially be closed to the public as the NPS develops a management plan to identify effective ways to preserve the integrity and interpret the site, while also providing access to it. The NPS will invite public involvement in planning for the site.

Established in 1936 as a unit of the National Park Service, the Ocmulgee Mounds National Historical Park preserves and interprets evidence of one of the longest periods of human habitation at any one site in the national park system. Ocmulgee Mounds National Historical Park has yielded artifacts from every major period of American Indian history in the Southeast. Visitors are encouraged to explore earthen mounds, a restored ceremonial earth lodge with original clay floor, an early colonial trading post, and Civil War earthworks.

The National Park Foundation works to protect wildlife and park lands, preserve history and culture, educate and engage youth, and connect people everywhere to the wonder of parks. We do it in collaboration with the National Park Service, the park partner community, and with the generous support of donors, without whom our work would not be possible.

The Open Space Institute (OSI) protects scenic, natural, and historic landscapes to provide public enjoyment, conserve habitat and working lands, and sustain communities. Founded in 1974, OSI has grown to become a partner in the protection of more than 2.3 million acres along the eastern seaboard from Quebec to Florida — including over 100,000 acres in the Southeastern U.S.