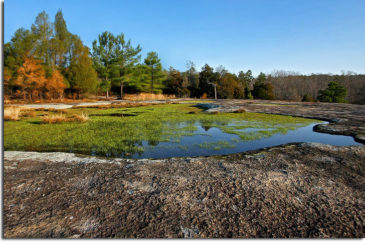 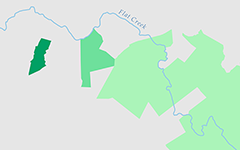 LANCASTER COUNTY, SC (Nov. 20, 2019) — Building on its work to protect habitat for a critically endangered species, the Open Space Institute (OSI) has protected more land for Forty Acre Rock Heritage Preserve, a celebrated nature preserve in the northern part of the state. The property includes a tributary of Flat Creek holding one of the last remaining populations of the state- and Federally-endangered Carolina heelsplitter (Lasmigona decorate) mussel.

The approximately 60-acre “Edwards” tract is near the “Ardrey” property protected by OSI and its partners last year, and subsequently added to Forty Acre Rock Heritage Preserve. Both properties buffer Flat Creek, home to the more than half of the known remaining population of Carolina heelsplitters (64 individuals at last count).

Thought extinct until they were rediscovered in 1987, heelsplitters are the sustained focus of state and federal restoration efforts. The mussels remain in the wild in eight distinct geographic areas in North and South Carolina, six of which OSI has protected over the past four years.

Silt-free stream bottoms are critical to the mussels’ feeding and breeding cycles, making riparian land protection a crucial component in their survival and recovery.

“OSI is proud to have protected more land for Forty Acre Rock Heritage Preserve and for the critically endangered Carolina heelsplitter,” said Kim Elliman, president and CEO of OSI. “We commend the South Carolina Department of Natural Resources and the Lynches River Conservation Fund for achieving an outcome that protects land for both habitat and recreation.”

Conservation measures that benefit the heelsplitter also benefit other aquatic species. South Carolina’s rivers are some of the most biodiverse in North America, containing upwards of 100 species of freshwater mussels — more than half of which are considered threatened. The Carolina heelsplitter is considered the most sensitive and endangered of these mussels.

Now that OSI has acquired the land, it will convey the property to the South Carolina Department of Natural Resources. Then, the property will undergo reforestation into native vegetation, and open to the public for recreation.

Since 2013, OSI has protected more than 12,000 acres in South Carolina, from the mountains to the sea.