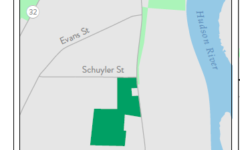 Since 1996, OSI has protected nearly 2,500 acres around the Saratoga National Historic Park

Saratoga, NY (September 23, 2021)— The Open Space Institute (OSI) today announced that management of its popular Saratoga Surrender Site has been transferred to the National Park Service (NPS) as part of the Saratoga National Historical Park. The property includes the site where the British Army surrendered during the 1777 Battle of Saratoga, an event that is considered the turning point in the American Revolutionary War.

While OSI maintains ownership of the nearly 19-acre Saratoga Surrender Site, an agreement grants the NPS management control of the property, which will continue to be accessible for public use, education, and enjoyment. The property is located in the Town of Saratoga, just a half mile south of Schuylerville on U.S. Route 4 and is open to visitors from dawn to dusk throughout the year.

“Saratoga Battlefield National Historical Park is one of our nation’s most valuable historic resources. OSI is proud to have protected this significant, storied, and visually stunning acreage and is pleased to have turned day-to-day management of the Saratoga Surrender Site over to the National Park Service,” said Kim Elliman, OSI’s president and CEO. “Thanks to our current management partnership with the National Park Service, and the significant effort of the Friends of Saratoga Battlefield to raise the funds for and install the amenities at the site, this scenic property will be maintained forever.”

“The Saratoga Surrender Site marks what is recognized as the turning point of the American Revolutionary War. It is located nine miles north of the Saratoga Battlefield Park, where the American army and militia stopped the British’s attempted retreat to Canada. The surrender is the first time in history that the British army surrendered on the battlefield and the surrendered artillery was vital to suppling the Continental Army,” said Brian Mumford, President of the Friends of Saratoga Battlefield (FOSB). “OSI’s partnership with the FOSB to develop the memorial site and OSI’s transfer of the management of this parcel to the National Parks Service is a welcomed addition to the enrichment the Park offers.”

The Saratoga Surrender Site is the property where British General John Burgoyne surrendered his army to American General Horatio Gates on October 17, 1777. The surrender bolstered the confidence of the colonies in their battle of independence from the British and marked a sea change in international support for the colonials. The event is considered by many to be the turning point of the American Revolution.

Saratoga County is one of the most rapidly growing counties in New York and development pressures increasingly threaten farmland and undisturbed wooded areas. For more than two decades, OSI has worked in the Saratoga County landscape to protect the historic sites, viewsheds, and important farmland that has been the hallmark of the community for hundreds of years.