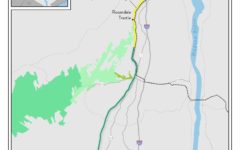 Plan will improve public access and safety along the rail trail

Ulster County, N.Y. (July 07, 2020)—The Open Space Institute (OSI), in partnership with Wallkill Valley Land Trust (WVLT), and the Hudson River Valley Greenway, today announced a $1 million plan to improve the northern 9.5-mile stretch of the Wallkill Valley Rail Trail located in the Towns of Rosendale and Ulster, beginning at Cragswood Road in New Paltz and ending at Route 32 in the City of Kingston.

The project is expected to improve overall public access to an OSI/WVLT-protected section of the trail; establish additional safety measures for residents and visitors; and reinforce the Wallkill Valley Rail Trail’s inclusion as part of the Empire State Trail.

“Building on the creation of the River-to-Ridge Trail in New Paltz and the protection and restoration of the Rosendale Trestle, OSI is excited to continue our efforts to build connections between people and land,” said Kim Elliman, president and CEO of OSI. “Well maintained and easily accessible trails play an important role in making communities more livable, healthy, and prosperous. This project is another step toward in establishing Ulster County as a world-class recreational destination and sets the stage for the transformative Empire State Trail."

“The Northern portion of the Wallkill Valley Rail Trail has some of the most diverse and engaging landscapes of the entire 22-mile trail,” said Christie DeBoer, executive director of the WVLT. “These improvements will help to create a much more enjoyable and safe experience for users of the trail — who enjoy it in each of the four seasons — while making access easier.”

State Parks Executive Deputy Commissioner Tom Alworth said, "This project is a great example of the kind of public-private partnership that we value so much at State Parks. The work being done will help make the Empire State Trail a world-class destination that will help drive healthy outdoor recreation and tourism activity in the Hudson Valley and beyond."

The trail improvement plan includes resurfacing of the trail path, rehabilitating three small bridges, and the removal of invasive species and excess vegetation to improve drainage. The project will also improve safety through improved road crossing and other trail signage to increase trail visibility.

At the Binnewater Road and Rockwell Lane trailheads, planned upgrades include improved grading to more gently slope entrance ramps and the installation of detectable, tactile pavers at each road crossing, which alerts people who are visually impaired that they are about to enter or leave a trail crossing and will provide for more universal accessibility at these major trail access points.

The project is being managed by OSI in partnership with WVLT and is funded by OSI-secured grants from the New York State Environmental Protection Fund (EPF) and the New York Office of Parks, Recreation, and Historic Preservation’s (OPRHP’s) Recreation Trails Program (RTP). Matching funds are also being provided by the Butler Conservation Fund and OSI.

OSI’s Kim Elliman noted the role of the Environmental Protection Fund (EPF) in accomplishing large-scale, multi-partner projects like this one, “This project is moving forward thanks to support from an EPF grant and we are grateful to Governor Cuomo and members of the legislature who continue to support this important funding source.”

The improvement work is scheduled to begin in mid-July and be completed around mid-October. For public safety, sections of the trail may be closed during active construction on weekdays, but the entire trail will remain open on weekends.

The series of rolling trail closures will be communicated as they occur on the Wallkill Valley Land Trust website https://wallkillvalleylt.org/ and on social media. Trail users are encouraged to check the site for the latest construction updates.

Local contractor, A. Colarusso & Sons, Inc., from Hudson, N.Y. has been hired to complete the four-month project.

The northern sections of the Wallkill Valley Rail Trail are included as part in the 750-mile Empire State Trail (EST), a bike and walking pathway that will run from New York City to Canada and from Albany to Buffalo. The EST will drive economic growth and boost tourism in communities along its route.

After partnering with WVLT to acquire the Rosendale and Ulster sections of the Wallkill Valley Rail Trail in 2009, OSI led a campaign to raise $1.5 million for structural improvements for the Trestle, turning a dilapidated railroad bridge into a regional asset. The trestle’s restoration allowed for the continuous connection of the trail between New Paltz and Kingston.