JASPER COUNTY, SC (June 2, 2021)—The Open Space Institute (OSI) closed Thursday, May 20, on one of the state’s most important and costly conservation properties, the 3,800-acre Slater tract in Jasper County. The acquisition price was approximately $16 million, making OSI’s purchase of the property among the largest conservation investments in state history. OSI intends to transfer the property to the South Carolina Department of Natural Resources (SCDNR) as funding becomes available.

“The Slater property fully incorporates every characteristic that justifies land protection in South Carolina,” explained Nate Berry, OSI Senior Vice President and Southeast Office Director. “It expands public access in an area where public lands are relatively scarce; it protects water quality and fisheries in the Port Royal Sound estuary and the Broad River; it secures habitat that is essential for hundreds of varieties of plants and animals, and it helps mitigate climate change by storing hundreds of thousands of tons of carbon.”

The property encompasses 3,800 acres of mature upland pinelands interlaced with bottomland forests and cypress/tupelo swamps. Eleven miles of the Coosawhatchie river and its tributaries flow within the borders.

The swamp and upland forests on the tract serve to mitigate downstream flooding and to sustain water quality in Port Royal Sound, one of the largest and most important estuaries on the East Coast. Slater is the anchor property for a larger initiative in this region to permanently protect habitat for rare, threatened, and endangered species of plants and animals.

Among the rare ecosystems on the property is a sand ridge that hosts a large and growing population of gopher tortoises, one of the northernmost colonies in South Carolina and one of the largest in the Eastern U.S. Gopher tortoises, a federally designated “at-risk” species, excavate extensive underground burrows that provide habitat for dozens of other animals, making the tortoise a “keystone” species in this fascinating ecosystem. The tortoise population of 150 individuals will continue to expand under OSI’s and SCDNR’s stewardship, enhancing a critical stronghold for these charismatic, docile, ancient reptiles.

“We are excited about the protection of the Slater tract and appreciate the partnership of OSI to ensure this tract remains a key piece for natural resources, such as the state endangered gopher tortoise,” said SCDNR Director Robert Boyles. “The SCDNR is diligently working to acquire this tract for future public use and recreation, as these tracts will be a great addition to the SCDNR Heritage Preserve and Wildlife Management Area managed lands.”

Other rare plants and animals that thrive on the site and benefit from its preservation include increasingly scarce southern hognose snakes, federally protected Raphinesque’s big-eared bats, bald eagles, Florida pine snakes and eastern diamondback rattlesnakes. Additionally, preserving the forests in the headwaters of the Coosawhatchie will sustain the pristine water quality necessary for the survival of West Indian manatees and endangered Atlantic and short-nosed sturgeon that occupy the lower reaches of the Coosawhatchie, the Broad and Port Royal Sound.

The Slater property serves as a bridge linking the nationally renowned ACE basin with the Southern Lowcountry Focus Area (SOLO).  Along with two smaller black water rivers, the Coosawhatchie and the Pocotaligo, the focus area comprises the South Carolina side of the Savannah River watershed. Together, the ACE and the SOLO cover more than a tenth of South Carolina’s land area, and constitute one of the largest undeveloped, ecologically intact regions on the East Coast.

This portion of Jasper County, near the border with Beaufort County, is under intense development pressure from the south. Hilton Head and Bluffton consistently rank among the fastest growing places in America. Bluffton’s population expanded approximately 2,000 percent over the past two decades. That growth, which has now reached Hardeeville in southeastern Jasper County, has closed off natural areas that were traditionally available to local residents.

“The protection of Slater is not just a game changer for future ecosystem protection and land use in this region. It is the game changer,” said Dr. Chris Marsh, Director of both the Spring Island Trust and The Lowcountry Institute. “OSI’s protection of the Slater Tract is a huge win for all those who love the outdoors in the region because it represents the first critical step in protecting the headwaters of the Port Royal Sound. We are so fortunate that OSI, the landowner, and partner conservationists were able to work together to get the deal done. This partnership will continue to collaborate to seek ways to keep other large tracts surrounding the Slater Tract in a wild state.”

'The protection of Slater is not just a game-changer for future ecosystem protection and land use in this region. It is the game-changer,' - Dr. Chris Marsh, Director, Spring Island Trust & The Lowcountry Institute.

Jasper County’s poverty rates are among the highest in South Carolina. County residents, more than half of whom are Black and Hispanic, depend on public lands and river access points for recreation and subsistence. Currently, the closest public property is a forty-minute drive away from most residents. The Slater property will provide extensive opportunities for fishing, hunting, and other outdoor recreation in close proximity to these rural communities.

OSI will hold the property for up to two years until the state raises the funds to purchase it. Prospective public sources include the federal Forest Legacy program, the South Carolina Conservation Bank and the S.C. Heritage Trust program.

“Our effort to protect this property would not have been possible without the unqualified support from The Knobloch Family Foundation, The CWD3 Fund at the Coastal Community Foundation of SC, The Nature Conservancy, Jasper County and our partners in the Port Royal Sound Watershed Initiative,” states Berry. “OSI is looking forward to working with county leaders, our partners, and residents over the coming years as conservation of this critical region continues.” 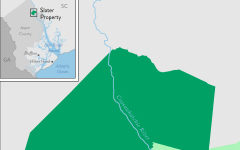