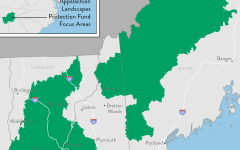 NEW YORK, NY (Feb. 19, 2021)—Seeking to accelerate land conservation in the eastern U.S. to counter climate change and its impacts, the Open Space Institute (OSI) today announced the launch of its $18 million Appalachian Landscapes Protection Fund (ALPF), which will focus, in part, on protecting key forested sections of Vermont, New Hampshire, and Maine. This first-of-its-kind fund is aimed specifically at protecting some of the nation’s most biologically rich and climate-resilient landscapes. The initiative aligns with the Biden administration’s recently announced plan to conserve 30 percent of U.S. land and waters by the year 2030 to leverage natural climate solutions, protect biodiversity, and slow extinction rates.

Harnessing the carbon-capturing role of forests to combat climate change, the ALPF seeks to conserve at least 10,000 acres in key portions of the three New England states. The funding is part of the ALPF’s larger effort to conserve 50,000 acres along the spine of the Appalachian Mountains, which contain the world’s largest broadleaf forest, are responsible for storing a majority of U.S. forest carbon, and provide essential climate refuge for plants and animals.

“Now more than ever, our future depends on forests. By putting climate change front and center, the Appalachian Landscapes Protection Fund will help protect the land that matters most as we take on the largest environmental challenge of our time,” said Kim Elliman, president and CEO of OSI. “While a changing climate can create overwhelming uncertainty, the conservation of forests can go a long way toward helping wildlife and people adapt, while reducing emissions through carbon storage and sequestration.”

“To address climate change, we need to keep carbon in our forests and improve how we manage lands to offset harmful emissions,” said Jad Daley, president and CEO of American Forests and an advisor to the ALPF. “Living in northern New England and having worked here, I know how important the forests of this region are. The Fund can play an important role in protecting our woodlands and demonstrating and documenting the value of land conservation as a critical and necessary response to climate change.”

To achieve critical, climate-related conservation goals, OSI is providing grants and loans for the acquisition of land and conservation easements that will leverage an additional $66 million in matching public and private funds. The ALPF also advances efforts by states, local communities, Native American tribes, and land trusts, to align their conservation goals around climate priorities. The ALPF will ease funding requirements for organizations that identify as Black, Indigenous, and People of Color-led that are at heightened risk of being negatively impacted by the climate crisis.

The Northern Appalachians focus area is one of three specific regions that are priorities for conservation by the ALPF, based on their intact habitat; ability to serve as corridors for migrating wildlife; contiguous forests; and ability to protect and increase carbon storage in vast forest resources that also provide clean water and recreational opportunities for millions of people. In addition to the Northern Appalachians, the other two focus areas are Cradle of Southern Appalachia in Georgia, Tennessee, and Alabama and Middle Atlantic in Pennsylvania, New Jersey, and New York.

To date, OSI has secured a $6 million grant from the Doris Duke Charitable Foundation and $6 million from six other regional foundations toward its $18 million goal. Additional funding will allow for further investment in the three target areas and/or the geographic expansion of the program.

The vast forests of Maine, New Hampshire, and Vermont are essential to countering the impacts of a changing climate. The forests hold enormous amounts of carbon — both above and below ground — and with conservation will be able to take up even more pollution in the future, while also keeping regional air and water clean.

The ALPF builds on many years of successful conservation. Since 2001, OSI has awarded nearly 120 grants and loans to land trusts and conservation groups in Vermont, New Hampshire, and Maine, assisting in the protection of more than 1.6 million acres of land.

The ALPF is part of a growing national effort to increase use of strategic land conservation to combat climate change. Forests, their trees, and soil are critical to storing carbon; and, when managed correctly, forests can also play a critical role in capturing the carbon emissions that are being produced today. (Learn more by reading OSI’s Meeting the Challenge of Climate Change guide here.)

'Now more than ever, our future depends on forests. By putting climate change front and center, the Appalachian Landscapes Protection Fund will help protect the land that matters most as we take on the largest environmental challenge of our time.' - OSI's Kim Elliman

In addition to providing critical watershed protection, recreational opportunities, and wildlife habitat, forests are a critical front-line defense against climate change. In 2019, forests in the United States stored 59 billion metric tons of carbon — the equivalent of more than 33 years of U.S. economy-wide emissions. Every year, forests remove 15 percent of the country’s carbon dioxide emissions, equal to removing more than 673 million cars from the road.

The Appalachian Mountain region, stretching 1,500 miles from Alabama to Canada, contains vast swaths of healthy, large, and contiguous forests that are critical in combatting climate change. These forests and rivers also provide tremendous benefits to society, including clean water, wood products, recreation, and personal rejuvenation for millions of people.

Yet despite their critical importance to the nation, the forests of the Appalachian Mountains face significant threats, including development, poor management, and energy extraction. Nationally, U.S. forests are permanently lost at a gross rate of just under a million acres per year.

Partners in the Effort

To expand the impact of the ALPF, OSI is turning to organizations such as American Forests, The Nature Conservancy, and the Land Trust Alliance, to share expertise, amplify efforts, coordinate investments, and develop clear guidance on how land protection can most effectively mitigate climate change. OSI is also collaborating with eastern Climate Alliance states, a growing coalition of 25 states committed to achieving emissions reductions set by the Paris climate accord.

“The Appalachian Landscapes Protection Fund will apply cutting-edge science to safeguard some of the most resilient, carbon-rich, and biologically diverse forests in North America,” said Sacha Spector, program director for the environment at Doris Duke Charitable Foundation. “Over the past two decades, OSI has been leading the way with innovative, science-based efforts to protect the most biodiverse and climate-resilient places across the Eastern U.S.”

In considering lands for conservation, the ALPF is harnessing cutting-edge climate science and decision support tools developed by The Nature Conservancy to identify and protect places that are “climate-resilient” — in that they will continue to protect habitat for sensitive plants and animals, even as the climate changes. A property’s climate resilience will be the major selection criteria, and within these areas OSI aims to protect places with the highest carbon storage potential by 2050, to help meet Paris Accord climate goals for carbon neutrality. The ALPF will also take into account a project’s co-benefits, such as community access, water quality, or flood hazard mitigation.