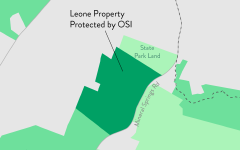 Town of Cornwall, NY (August 30, 2021)— Building on a 40-year commitment to land conservation in the Hudson Highlands, the Open Space Institute (OSI) today announced the acquisition of property in the Town of Cornwall that has the potential to provide a critical, off-road trail connection between two popular recreational destinations: Black Rock Forest and Schunnemunk Mountain State Park. Almost completely forested and including a significant portion of the wetlands within the Moodna Creek watershed, the acquisition will help safeguard drinking water sources in fast-growing Orange County.

“With access to trails and open space at a premium. it’s critical that we complete projects that connect green landscapes and boost community recreation and health,” said Kim Elliman, president and CEO of the Open Space Institute, who noted that protection of the Leone property is a key step forward in achieving OSI’s Highlands West Connectivity Plan and creating a regional, long-distance Highlands Trail.

“This valuable acquisition by our partners at OSI sets the stage for the later expansion of Schunnemunk State Park as part of a larger vision to create an interconnected trail network in the western Hudson Highlands, where we have four State Parks,” said Parks Commissioner Erik Kulleseid. “The purchase also protects a portion of the watershed of one of Orange County’s largest rivers, which is listed by New York State as Significant Coastal Fish and Wildlife Habitat.”

“The Palisades Interstate Park Commission (PIPC) is excited about this new acquisition. It connects two parcels into one contiguous area of open space, helps to protect important watershed lands, and protects critical area for nesting birds and other wildlife. Over the past two years, we have seen just how important outdoor spaces are as refuges for individuals and families,” said Joshua Laird, Executive Director of PIPC. “As parks like Harriman and Bear Mountain become more crowded, it is ever more important that we find new places for people to recreate safely. Legacy Ridge and this Leone property are a wonderful option for our visitors.”

While OSI provided more than $725,000 of its own capital toward this transaction, the permanent protection of the property was made possible thanks to a five-year, no interest loan of $400,000 from Black Rock Forest.

“Black Rock Forest is pleased to have helped protect this ecologically important property. It is important for preserving native biodiversity now and in the future due to its habitat diversity and its central location connecting other conserved lands. Its protection also enhances people’s opportunities to enjoy the forests and spectacular viewsheds of the Highlands region,” said Bill Schuster, executive director of Black Rock Forest.

The Leone property was listed as a priority acquisition in OSI’s recently announced Highlands West Trail Connectivity Plan and is one of the first significant acquisitions toward achieving the plan. The plan highlights a range of opportunities to permanently protect and enhance the landscape, working toward the creation of a connected, regional Highlands Trail network that will provide recreational opportunities for residents and visitors, protect critical wildlife habitat, and safeguard local watersheds.

Almost completely forested and including a significant portion of the wetlands within the Moodna Creek watershed, OSI's Leone acquisition will help safeguard drinking water sources in fast-growing Orange County.

In addition, due to containing several different types of terrain and connecting to other forested lands that allow for the movement of plant and animal species, the property is also uniquely positioned to support a diverse array of plants and animals even as the climate changes, making it especially critical for wildlife habitat.

The property includes a portion of wetlands that are part of the Moodna Creek watershed, which is identified in Orange County’s Open Space Plan as a priority watershed and is considered irreplaceable due to its significant fish and wildlife habitat. OSI’s acquisition of the property will ensure the protection of wetlands that recharge groundwaters and control flooding, while also supporting breeding trout populations in nearby high-quality streams, including Mineral Springs Brook, Trout Brook, and Woodbury Creek.

The property is also part of an area that was designated an Important Bird Area (IBA) by Audubon New York and identified as critical habitat for rare, threatened, and endangered bird species, including the cerulean warbler, the wood thrush, and the blue-winged, worm-eating and prairie warblers.

OSI will allow hiking and other forms of passive recreation during its ownership of the Leone property. The property is expected to be transferred to New York State as an addition to Schunnemunk Mountain State Park.

About OSI in the Region

In and around the western Hudson Highlands, OSI has protected more than 26,000 acres, adding the land to Hudson Highlands, Clarence Fahnestock Memorial State Park, and Schunnemunk state parks. Most recently, OSI has partnered with the Unites States Military Academy cadets for four consecutive years to build new pedestrian trail bridges at Fahnestock State Park, a partnership that provides cadets engineering majors with real-world design and build experience while improving the park for the public. In 2020, OSI launched an extensive plan to improve recreational access at Clarence Fahnestock Memorial State Park and upgrade overall public access; provide enhanced wayfinding signs for navigation; better accommodate new and existing users to the park; and deepen visitor engagement. In 2014, OSI secured the Hudson Highlands' largest-ever conservation easement on Black Rock Forest, then donated the easement to the State of New York, guaranteeing public access to nearly 60 miles of hiking trails.