CHATTANOOGA, TN (May 18, 2021)—The Open Space Institute (OSI), TennGreen Land Conservancy, and The Conservation Fund today announced a critical acquisition along the popular Fiery Gizzard Trail in Tennessee’s South Cumberland State Park. Conservation of the land officially connects the trail to a popular waterfall and a celebrated scenic lookout point, while securing habitat for sensitive plants and animals.

With the support of OSI, The Conservation Fund and TennGreen purchased the 220-acre property, called the “Castle” property, and transferred it to Tennessee Department of Environment and Conservation, fulfilling one of the South Cumberland State Park’s top conservation acquisition priorities. The Castle property includes bluff views and rich forests beloved by outdoor enthusiasts, as well as potential habitat for rare plants and animals in the region.

With its protection, the land will be also safeguarded from nearby timber harvesting and mineral extraction.

"OSI is proud to have helped to secure this resounding conservation win for the state of Tennessee,” said Joel Houser, OSI’s Southeast Field Coordinator. “The Fiery Gizzard is a remarkable place that not only is a home for wildlife but also a tremendous boost to the local recreational economy. We congratulate TennGreen Land Conservancy and The Conservation Fund on their dogged efforts to see this land protected.”

'The Fiery Gizzard is a remarkable place that not only is a home for wildlife but also a tremendous boost to the local recreational economy.' - OSI's Joel Houser

“Securing this land and a portion of the Fiery Gizzard trail for conservation will have lasting environmental and economic benefits for the community,” said Ralph Knoll, The Conservation Fund’s Tennessee State Director. “We’re honored to have helped make this property permanently a part of South Cumberland State Park, one of Tennessee’s many iconic recreation destinations.”

The Fiery Gizzard Trail is a 9.1-mile loop trail located an hour from downtown Chattanooga, featuring scenic waterfalls and breathtaking scenic views. Although it is one of the most popular hiking trails in Tennessee, much of the Fiery Gizzard Trail runs along private property and is at risk of being closed to the public. Since the 1930s, the trail has existed because of the perennial generosity of private landowners, with only handshake agreements keeping the trail open.

One of the most beautiful and untouched places in the Southeast, the Southern Cumberland Plateau is also severely threatened by quick-sprouting subdivisions and massive property sell-offs. Only 10 percent of the remarkable landscape is protected.

The Southern Cumberland Plateau supports some of the most geologically unique habitat in North America — yet only 10 percent of the Plateau is protected.

Conservation of the unprotected forests along the Cumberland Plateau is also a priority of many regional planning initiatives including Thrive Regional Partnership's Natural Treasures Alliance, and the Southeast Conservation Blueprint version 4.0.

This expansion at Fiery Gizzard was supported through OSI’s Southern Cumberland Land Protection Fund, made possible with funding from the Lyndhurst Foundation, Benwood Foundation, and Merck Family Fund, which seek to protect wildlife habitat and biodiversity in landscapes that are critical to facilitating adaptation to climate change. 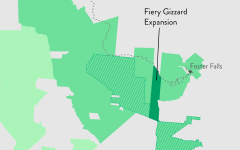