JASPER COUNTY, SC (Nov. 2, 2021)—The Open Space Institute (OSI) announced today the protection of a key property on South Carolina’s southern coast – the 336-acre Slater Duck Ponds tract. Permanent conservation of this parcel protects essential wildlife habitat in one of the most vulnerable areas of the state, while creating new opportunities for recreation in a region with severely limited public access to nature.

This part of South Carolina – in Beaufort, Hampton, and Jasper counties – is simultaneously one of the most biologically diverse places in the Southeast and one of the fastest-growing. Most significantly, in a state with a half-century legacy of conservation successes, it is also one of the least protected.

The two OSI-protected properties are located near Savannah, Hilton Head, Ridgeland, and Hardeeville, among the fastest-growing places in America. The protection of more than 4,000 acres, totaled, offers important opportunities for hunting, fishing, birding, hiking, and cycling in an area where the nearest similar public preserve is almost an hour away.

“The Open Space Institute is proud to save habitat, enhance public access, and preserve water quality for South Carolina’s rapidly-growing southern coastal region,” said Nate Berry, OSI Senior Vice President and Southeast Office Director. “We are pleased to work with the South Carolina Conservation Bank and the South Carolina Department of Natural Resources to protect more of the state’s most important natural areas.”

“Projects like Slater Duck Ponds and Slater not only save spectacular wildlife and plant habitat in the rapidly growing coastal plain. They also help the state expand opportunities for outdoor recreation, the demand for which has surged since the pandemic began,” said Raleigh West, Executive Director of the South Carolina Conservation Bank.

Near the Duck Ponds parcel is the Slater property, home to one of the largest colonies of gopher tortoises in the Eastern United States. The $16 million acquisition price for Slater ranks OSI’s purchase as one of the largest conservation investments in state history. OSI is in the process of transferring that parcel to the SC Department of Natural Resources, who will then develop the infrastructure necessary for the public to enjoy the property while preserving its biological integrity.

This area is nationally important in its own right, and also serves as a bridge linking the renowned ACE basin with the Southern Lowcountry Conservation Focus Area. It consists of the watersheds of three beautiful blackwater rivers, the Coosawhatchie, Pocotaligo, and Tulifinny, forming the headwaters of the Broad River estuary. All told, this region encompasses more than a tenth of South Carolina’s land area, and constitutes one of the largest undeveloped, most ecologically intact regions on the East Coast.

The region is under intense development pressure, with nearby Hilton Head and Bluffton consistently ranking among the fastest growing places in America. Bluffton’s population expanded by approximately 2,000 percent over the past two decades. Paradoxically, however, Jasper County’s poverty rates remain among the highest in South Carolina – close to 20%. Residents, more than half of whom are Black and Hispanic, depend on public lands and river access points for recreation and subsistence. Conservation of these properties, combined with expanded public access, will provide extensive opportunities for outdoor recreation near fast growing areas and underserved rural communities.

Founded in 1974, OSI has been a partner in the protection of more than 2.3 million acres along the eastern seaboard from Quebec to Florida — including over 100,000 acres in the Southeastern U.S. Slater Duck Ponds is OSI’s 47th completed project in six years in South Carolina and Georgia. 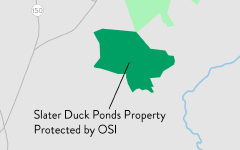