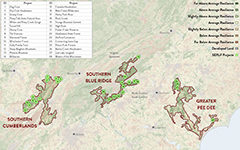 DURHAM, NC (July 20, 2020)—A scenic mountain summit in northwestern North Carolina has been permanently protected thanks in part to a grant from the Open Space Institute (OSI). The project will enhance water quality in the New River and secure key habitat that will continue to provide a haven for sensitive plants and wildlife.

The 549-acre “Phoenix Mountain” property, protected by The Nature Conservancy (TNC) and located in an area vulnerable to development of second homes, contains one of six peaks in the Amphibolite Mountain Range. The range is named for a special rock appearing in the region, which produces soils supporting 18 rare species and three federally listed plants: Spreading or Mountain Avens, Gray’s Lily, and Roan Mountain Bluet. Additionally, streams running through the property drain into the headwaters of the North Fork of the New River, the focus of widespread environmental cleanup efforts.

"OSI is gratified of the conservation of a key mountain summit within this stunningly beautiful and ancient mountain range,” said Joel Houser, OSI’s Southeast Field Coordinator. “This project will conserve habitat for wildlife not only today, but even as the future climate changes. We are proud to have supported TNC’s latest land protection victory in the region.”

Since 2014, projects supported by OSI's Southeast Resilient Landscapes Fund have opened nearly 25,000 acres of protected land to the public for recreation.

With its conservation, the property will now become part of TNC’s Phoenix Mountain Preserve, which was established in 2012 and now includes over 1,000 acres. The newly conserved property also helps advance a network of protected lands within the region, including Three Top Mountain Game Lands, Paddy Mountain, Mount Jefferson, and Elk Knob State Parks.

The successful conservation of the Phoenix Mountain property represents the final project of OSI’s $6 million Southeast Resilient Landscapes Fund, which helped to protect almost 30,000 acres through support for 28 transactions in three regions: (1) the Southern Blue Ridge in North Carolina, South Carolina and Tennessee; (2) the Greater Pee Dee River in the Carolinas; and (3) the Southern Cumberlands in Alabama, Georgia and Tennessee.

Since it was launched in 2014, the Fund has targeted properties for their “climate-resilience” — meaning, places whose complex topography and geology make it more likely to provide habitat even under climate change. Nearly 25,000 acres of the protected land supported by the Fund are now open to the public for recreation.

Funded by the Doris Duke Charitable Foundation, OSI’s Southeast Resilient Landscapes Fund has been a pioneering effort to harness cutting-edge climate science for targeted land protection in the southeast. The Fund has provided grants to 10 national and regional land trusts, specifically targeting climate-resilient landscapes that are, by definition, “natural strongholds” likely to withstand the growing impact of climate change and to offer refuge to a diverse array of plants and animals. With funding from Duke and the Z Smith Reynolds Foundations, the Fund supported complementary efforts by 12 regional land trusts to incorporate climate resilience in their land conservation plans.

Within the Southern Blue Ridge, the Fund secured the successful conservation of more than 9,100 acres through 12 projects — including the establishment of Headwaters State Forest and Bobs Creek Natural Area; the enlargement of DuPont State Forest and Jones Gap State Park; and the protection of viewshed from the Blue Ridge Parkway.