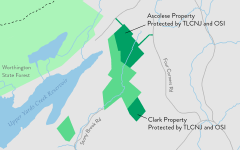 The 57-acre “Ascolese” and 21-acre “Clark” properties consist of marshes and forests of native plants, and offer a stunning view of the Kittatinny Ridge. With the addition of these properties — which were threatened by development before their conservation — the Yards Creek Nature Preserve now stands at 231 acres, all of which were protected with the support of OSI.

OSI grants protected the two properties through its Delaware River Watershed Protection Fund, which is made possible by the William Penn Foundation. The Delaware River Watershed Protection Fund seeks to harness land protection to ensure abundant, clean water within the 13,000 square mile drainage of the Delaware River. Fifteen million people rely on the watershed for clean drinking water — including residents of the cities of Trenton, Philadelphia, Wilmington, and New York City.

Since its creation in 2014, the Fund has supported roughly 53 capital land protection projects, conserving over 19,000 acres of lands that filter water within the Delaware Basin.

“The Open Space Institute is proud to have supported the protection of these additional lands to expand the Yards Creek Nature Preserve, and to further a legacy of protecting forested headwaters in the Delaware River watershed that will produce pure drinking water for generations to come,” said Bill Rawlyk, OSI's Mid-Atlantic field coordinator. “We applaud the tireless efforts of The Land Conservancy of New Jersey in successfully bringing this project to fruition.”

Yards Creek Preserve is near the Appalachian Trail, and adjacent to more than 76,000 acres of public land in the Worthington State Forest and Delaware Water Gap National Recreation Area.

“One of our goals in expanding this preserve, in addition to watershed protection, is to provide natural corridors where wildlife can travel along the slopes of the Kittatinny Ridge, uninhibited by features of residential development,” said Sandy Urgo, TLCNJ vice president. “This irreplaceable habitat is now permanently protected.”

Although the rivers and streams that feed the Delaware traverse one of the most densely populated parts of the mid-Atlantic region, this area also contains 700,000 acres of wetlands and pockets of wilderness such as the Delaware Water Gap National Recreation Area, 400 miles of the Delaware National Wild and Scenic River, and a significant section of the Appalachian Trail. Yards Creek Preserve has taken its place in this larger effort by permanently safeguarding drinking water quality, preventing additional development on the slopes of the Kittatinny Ridge.

In addition to OSI and TLCNJ, the project was supported by Victoria Foundation, the N.J. Green Acres Program, and several anonymous private donors.