Expanding a model nature preserve for the Delaware River Basin

BLAIRSTOWN, NJ (Dec. 5, 2022)—Support from the Open Space Institute (OSI) has once again expanded a celebrated Yards Creek Preserve in northwestern New Jersey. The acquisition, which is now owned and managed by The Land Conservancy of New Jersey (TLCNJ) as part of its Yards Creek Preserve, represents another critical victory for protection of the Delaware River Watershed's pristine forested headwaters.

The newly protected 16-acre property is entirely wooded with large oak, birch, and beech trees. The forest filters the headwaters to the Paulins Kill River, which in turn empties into the Delaware River Watershed. The Preserve is located near the Appalachian Trail and adjacent to more than 76,000 acres of public land in the Delaware Water Gap National Recreation Area.

This acquisition — which represents the sixth expansion of Yards Creek Preserve completed with OSI’s support — was made possible with the help of OSI’s Delaware River Watershed Protection Fund, which is seeded by the William Penn Foundation. Since its launch in 2014, OSI has protected approximately 20,000 acres through the Fund. Approximately 15 million people, including residents of Trenton, Philadelphia, Wilmington, and New York City, rely on the Delaware River Watershed for clean drinking water.

“The Open Space Institute is proud of its role in this sixth expansion of Yards Creek Nature Preserve, which will further protect the unspoiled forested headwaters and preserve clean drinking water within the greater Delaware River Watershed," said Bill Rawlyk, OSI's Mid-Atlantic field coordinator. "We applaud The Land Conservancy of New Jersey in building a model nature preserve for the Delaware River Basin.”

Spanning more than 300 acres, Yards Creek Preserve was established in 2019 as an ambitious conservation project to help protect drinking water while curbing encroaching development. TLCNJ manages the Preserve’s native vegetation, mature forests of oak and hickory, and healthy soils, to enhance their ability to filter drinking water and store carbon.

By protecting large tracts of adjacent land, conservationists are developing a resilient habitat corridor in the region that will help sensitive plants and animals better adapt to climate change. 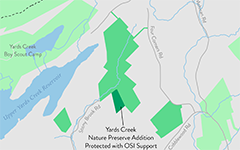