This News protects
Land for Recreation
Land for Habitat 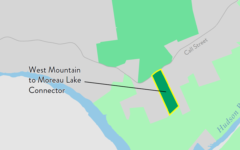 Lake Luzerne, N.Y. (December 2, 2021)—The Open Space Institute today announced a land protection success that will, for the first time, provide a direct recreational and habitat connection between Saratoga County, Moreau Lake State Park and, ultimately, the Adirondack Park. The newly protected land completes OSI’s years-long goal of creating the corridor of protected land in one of the fastest-growing regions in the state.

OSI purchased the newly protected, 60-acre “Moreau Lake Connector” property from Margie French, who owned the land for more than 40 years before selling the parcel to OSI. The property is situated in Warren County between the southeastern boundary of the Adirondack Park and Moreau Lake State Park. It is adjacent to Ralph Road State Forest and more than 1,260 acres of OSI’s “West Mountain” acquisition to the north and Moreau Lake State Park, which OSI has more than doubled in size, to the south.

“With the permanent protection this property, a years-long effort to link Saratoga County to the Adirondack Park is finally taking shape – and with that we are helping to strengthen connections to the land and connections between communities,” said Kim Elliman, OSI’s president and CEO. “With access to trails and open space at a premium, particularly in highly developed areas, it’s critical that green corridors be created and protected for public recreation, community health, and the protection of wildlife.”

“Protecting and making recreational and habitat connections between Saratoga County and the Adirondack Park benefits wildlife, the environment, and the regional economy,” said New York State Department of Environmental Conservation Commissioner Basil Seggos. “OSI’s acquisition of the Moreau Lake Connector property supports the State’s ongoing efforts to connect visitors with recreational opportunities while conserving natural resources and wildlife habitat. DEC looks forward to continuing to partner with OSI to preserve this remarkable area and enhance access for New Yorkers and visitors to explore the beauty of the Adirondacks.”

With several existing access roads running throughout the property, the forested land has the potential to expand visitor access and recreational use of Ralph Road State Forest and the northern side of Moreau Lake State Park. In the future, the property may be considered for additional trail creation and for the potential creation of a parking area and trailhead along Call Street.

The acquisition furthers OSI’s goal of establishing trails between the Saratoga Spa State Park, Moreau Lake State Park, and the Adirondack Park Preserve to better welcome and disperse new and existing visitors to the area.

With most other parcels between the Adirondacks and Moreau Lake State Park already developed with residential homes, this acquisition presented one of the last and best options to create a green corridor between Vermont’s Green Mountains and the Adirondacks that establishes connected wildlife habitat and supports the migration and movement of plant and animal species.

Identified as a “climate flow area,” meaning the land is used by a high volume of plants and animals as a way to move across the landscape, the property is particularly important for climate-related migration. With the permanent protection of this property, OSI is ensuring that plant and animal species are able to freely move and migrate from the banks of the Hudson River all the way into the southern Adirondack Park and Lake George Wild Forest on protected land.

This property, and the properties it connects to, are home to a diversity of wildlife. The Moreau Lake Connector property is located within an area designated as a “significant natural community” by New York State, meaning that the wildlife communities in this area are rare or are high-quality natural communities.

Categorized as a “Hemlock-northern hardwood forest,” the property is a mixed tree species forest that consists primarily of eastern hemlock and other hardwood species such as maples, birch, beech, or ash.

The Moreau Lake Connector property is one of eight significant properties, including the Spier Falls addition which doubled the size of Moreau Lake State Park, Big Bend, Ellsworth and Kenison (together known as Greentree Lake), Hudson Pointe, Faith Bible Church, and West Mountain, together totaling more than 7,000 acres, that OSI has protected in the area in support of creating a connected, green corridor in the Palmertown Range.

OSI and the Palmertown Range

In 2018, OSI, in partnership with Saratoga PLAN and local partners, created the Southern Palmertown Conservation and Recreation Strategy, a conservation and recreation road map for the sector of the Adirondack Foothills that runs from the Hudson River at the northern edge of Saratoga County, to the City of Saratoga Springs in the south.

The centerpiece of the Palmertown Strategy will be the development of a landscape scale, 50-mile-long multi-use trail system called the Sarah B. Foulke Friendship Trails System. A year-long master planning process for an inclusive trail network was completed this summer.