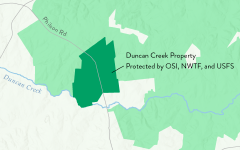 LAURENS COUNTY, SC (Jan. 5, 2021)—The Open Space Institute (OSI) announced today its latest conservation success in South Carolina. In its 12th significant land acquisition in the South Carolina Piedmont over the last five years, OSI secured important publicly accessible habitat for the wild turkey thanks to support from the National Wild Turkey Federation (NWTF) and in partnership with the USDA Forest Service (USFS).

The 481-acre Duncan Creek property is surrounded by more than 170,000 acres of the Enoree District of the Sumter National Forest near Clinton, South Carolina. The Duncan Creek property has nearly a mile of frontage on Duncan Creek, the largest tributary of the Enoree River. The tract is a priority focus area of the USFS due to its intact habitat, climate-resilient connections with other protected lands, and protection of the nearby Philson Shooting Range from incompatible development.

Established in 1936, the Enoree District is named for the Enoree River, an 87-mile-long tributary of the Broad River, which supplies drinking water for the City of Columbia. The name Enoree is a Cherokee word meaning “river of muscadines” which are wild grapes that grow in abundance in the watershed. The Enoree District has active recreation, soil and water quality improvement, wildlife and fisheries, timber management, and prescribed burning programs.

“The Open Space Institute is excited to have protected this significant forest inholding for one of South Carolina’s signature game species, and the over 50 priority species of animals that call this land home,” said Nate Berry, Senior Vice President at OSI. “I thank NWTF and the USFS for their partnership to make the permanent protection of this land a reality.”

Wild turkeys were driven to the brink of extinction in the 1930s with only 30,000 birds estimated to have remained in the wild due to overhunting and habitat loss. Today, there are more than seven million birds roaming the entire North American native range of the species. Preventing the extinction of the wild turkey is widely considered one of America’s greatest wildlife conservation success stories.

“NWTF is excited to engage in conservation projects that protect and enhance the populations of wild turkey and other important wildlife in the Enoree District”, said National Wild Turkey Federation South Carolina State Chapter President Dennis Waters. “Projects like this will continue to protect wildlife and provide public recreation for future generations.”

“Congratulations to the Open Space Institute and National Wild Turkey Federation for conserving the important Duncan Creek property, a significant inholding in the Enoree District,” said Rick Lint of the U.S. Forest Service. “Partnerships like this are what make conservation in the Piedmont successful, we look forward to acquiring the Duncan Creek property using Land and Water Conservation Funds.”

In the coming year, OSI plans to convey the property to the USDA Forest Service as a strategic addition to Sumter National Forest.

Founded in 1974, OSI has grown to become a partner in the protection of nearly 2.3 million acres along the eastern seaboard from Quebec to Florida — including over 100,000 acres in the Southeastern U.S.