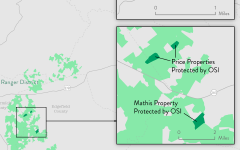 CHARLESTON, SC (Oct. 23, 2020) — The Open Space Institute (OSI) and the U.S. Forest Service today announced the addition of three properties, totaling 325 acres, to the Sumter National Forest in the Piedmont ecoregion of South Carolina. The transfer of the Price, Mathis and Gilchrist properties—within the Long Cane and Enoree Ranger Districts—is the result of a combination of funds from the federal Land and Water Conservation Fund (LWCF) and a donation of land by OSI.

The Price and Mathis additions in Edgefield and McCormick counties provide important habitat for the federally endangered Carolina heelsplitter freshwater mussel and provide important watershed protection for the Savannah River basin. The Gilchrist addition in Union County was about to be sold for development. It was the site of an illegal dump that has now been cleaned up, to benefit the Broad River basin.

“OSI is proud to protect these critical inholdings to expand the Sumter National Forest and protect the endangered Carolina heelsplitter,” stated OSI Senior Vice President Nate Berry, who is based in Charleston and oversees OSI’s work in South Carolina. “Strategic land conservation plays a fundamental role in helping to protect habitat and ensure a better quality of life for South Carolina. We look forward to continuing this successful partnership with the U.S. Forest Service and other conservation partners around the state.”

“The Sumter National Forest appreciates the efforts of the OSI to protect inholdings within the highly fragmented Piedmont landscape,” said Forest Supervisor Rick Lint. “On our Long Cane District, the Mathis and Price tracts are located on tributaries that feed directly into important Carolina heelsplitter habitat.”

Biologists estimate that as few as 200 wild Carolina heelsplitters remain in 11 isolated populations (ten in South Carolina streams and one in North Carolina).

“The Gilchrist tract on our Enoree District is a small but important donation that consolidates the forest and provides additional watershed protection in a highly erosive area of the forest,” Lint said. “The lands protected in this partnership with OSI will result in lasting benefits for the public to use and enjoy.”

The U.S. Forest Service manages 155 national forests, which often consist of large contiguous forests and grasslands. However, some national forests consist of interspersed tracts between state and private lands, as seen in the South Carolina Piedmont.

The Sumter National Forest is the most fragmented national forest in the Forest Service system. This patchwork of public land was established in the 1930s with sub-marginal or abandoned cotton farms that had been taken out of production, as well as cutover forests and tax delinquent forest lands. Much of the land was highly eroded and depleted by unsustainable farming practices. The Forest Service has worked for generations to continue to restore and protect these lands for wildlife, water quality and public recreation.

The Forest Service receives donations, participates in land swaps, and purchases land as funds become available. Acquisitions like the Price, Mathis, and Gilchrist tracts help reduce fragmentation and provide improved access for quiet areas, hiking, biking, off-road vehicles, horseback riding and wildlife protection. These properties are the first protected as part of the multi-year, multi-stakeholder “Promise of the Piedmont” initiative being led by the Forest Service and supported by OSI.