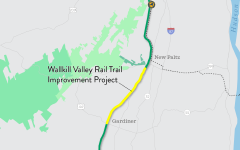 Project will further improve public access and safety along the rail trail.

New Paltz, NY (September 29, 2022)- The Open Space Institute (OSI), today announced the start of a project, being completed in partnership with and with funding provided by Ulster County, to improve a 5.5-mile section of the Wallkill Valley Rail Trail between Plains Road in New Paltz and Main Street in Gardiner.

The $885,000 project is expected to improve overall public access to the trail and establish additional safety upgrades and measures for residents and visitors.

The improvement project began earlier this month, with work starting in Gardiner, and will be completed by Spring 2023. This project is the first of three trail improvement projects in Ulster County that OSI is spearheading over two years.

“Well maintained trails play an important role in making communities more livable, healthy, and prosperous. This project is another step toward establishing Ulster County as a world-class recreational destination," said OSI president and CEO Kim Elliman, who noted that the Wallkill Valley Rail Trail project builds on the organization’s recent success in creating the River-to-Ridge Trail in New Paltz, the protection and restoration of the Rosendale Trestle, and the most recent upgrades to the northern 13.5 miles of the Wallkill Valley Rail Trail in the Towns of New Paltz, Rosendale, and Ulster.

“These trail projects not only connect people with nature and each other, they also reinforce the great sense of community here in Ulster County,” Elliman added.

Acting Ulster County Executive Johanna Contreras’ said, “We are so fortunate in Ulster County to have access to safe, accessible, and well-maintained trails. This improvement project will further enhance this network for both residents and visitors to enjoy. We are proud to partner with the Ulster County Legislature to dedicate ARPA funds to this project. OSI’s improvements to the Wallkill Valley Rail Trail will have a lasting, positive impact on our community.”

Neil Bettez, Supervisor for the Town of New Paltz said, “With people looking to connect with nature, it is critically important to make these trails safe and welcoming. We are grateful for the OSI’s efforts to continually build and improve trails in the area to support the ongoing health of our residents and visitors."

"Improvements to our local trails are a gift to the residents and visitors of New Paltz. These upgrades create more enjoyable and safer experiences for users of the trail — who will be able to use it in each of the four seasons,” said Tim Rogers, the Mayor of the Village of New Paltz.

Marybeth Majestic, Supervisor of the Town of Gardiner said, “The Wallkill Valley Rail Trail is an incredible asset to the Town of Gardiner. We are thrilled with the improvements being made by the Open Space Institute using Ulster County American Rescue Plan funding. We are well aware that now, more than ever, people enjoy recreating outdoors and we are extremely grateful to Ulster County and OSI for the improvements being made."

Christie DeBoer, Executive Director of the Wallkill Valley Land Trust, asked users, supporters, and community members to be patient while the trail work is being done. "Although there will be short-term disruptions, the long-term benefits of the improvements will be remarkable — and includes a rail trail that is wider, safer, and well-drained," DeBoer said. "These trail upgrades will also enhance the overall user experience of the trail while protecting essential habitat and natural resources."

Joe Pirrotta, President of the Wallkill Valley Land Trust, said the organization is grateful for its partnerships with the Open Space Institute and the County of Ulster. "When organizations forge collaborations such as this, the real benefit is the larger community," Pirrotta said.

The project is being completed by local contractor P.E. Colucci Excavating, Inc and managed by OSI in partnership with the Wallkill Valley Land Trust.

The trail improvements are funded through OSI-secured grants and private funds. In 2021, Ulster County awarded OSI $2.1 million in American Rescue Plan Act (ARPA) funds toward three rail trail improvement projects, with OSI utilizing private support to provide an additional $95,000 worth of project management services. This Wallkill Valley Rail Trail project from Plains Road in New Paltz to Main Street in Gardiner is the first of the three ARPA-funded projects. The project is also being supported by in-kind services by partner municipalities.

For public safety, trail users are asked to stay clear of all construction equipment and heavy machinery along the trail and follow all posted signage. Trail closures should be expected during the week to accommodate construction schedules; however, the trail will be fully open to trail users on weekends and holidays.

As work progresses, the series of rolling trail closures will be communicated as they occur on the Wallkill Valley Land Trust website https://wallkillvalleylt.org/ and on social media. Trail users are encouraged to check the site for the latest construction updates.

The Open Space Institute protects scenic, natural, and historic landscapes to provide public enjoyment, conserve habitat and working lands and sustain communities. Founded in 1974, initially, to protect significant landscapes in New York State, today, OSI has been a partner in the protection of over 2.3 million acres in North America.

Over the past 40 years, OSI has protected more than 33,000 acres on and along the Shawangunk Ridge in Orange, Sullivan, and Ulster counties—a total more than twice the size of Manhattan. The work, achieved with the support of local partners and generous donors, has expanded parkland, created trails, preserved local viewsheds, and protected vulnerable farmland and wildlife habitats.

In 2015, OSI partnered with Ulster County by providing $150,000 towards a feasibility and engineering study for the Ashokan Rail Trail. After the OSI-funded study was completed, the Ashokan Rail Trail was designed and constructed by Ulster County through a partnership with the New York City Department of Environmental Protection (DEP), and the trail was opened in 2019.

Over the years OSI has continued to add to the mosaic of protected lands in the area. Committed to protecting the Shawangunk Ridge and improving public access to protected lands, OSI has more than doubled the size of Minnewaska State Park preserve; rebuilt over 15 miles of Minnewaska’s historic carriage roads; and most recently, OSI raised more than $3 million toward the design and construction of the Minnewaska Visitor Center which opened in 2020.