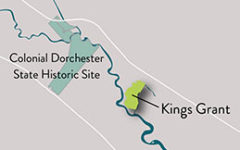 NORTH CHARLESTON, SC (April 12, 2018)—Expanding upon its work in the South Carolina Lowcountry, the Open Space Institute (OSI) has conserved some of the last undeveloped waterfront along the Ashley River. As part of the 80-acre Kings Grant Wetlands Restoration Project, OSI is also facilitating one of the largest saltwater restoration projects in state history. Once a pristine tidal marsh, the land was backfilled to develop a now-defunct golf course. In recent years, a residential housing development had been proposed for the Kings Grant site.

After the wetlands restoration is complete, the remaining acreage will become a public park, walking trail and canoe and kayak launch owned and operated by the City of North Charleston.

“These enhancements to the Ashley River, in a developed section of the Lowcountry, are an exciting step forward in restoring an irreplaceable asset to the community,” said Kim Elliman, president and CEO of OSI. “These projects truly demonstrate the value of protecting land for habitat, public recreation and storm resiliency. OSI is proud of our ongoing work in South Carolina and grateful to our many partners and local support.”

Due to its location in the estuary, the restored property will support a rare combination of intertidal brackish and saltwater wetlands, a high priority for restoration for state and Federal Resource agencies. As sea levels rise, the restored marsh will play an important role in buffering inland communities from storms and allowing marsh habitat to change with rising water levels. Sited less than ten miles from three of South Carolina’s fastest-growing municipalities — North Charleston, Charleston and Summerville — the site will create an important public access point on the Ashley River and put in/take out on the Ashley River Blue Trail.

The project is intended to create mitigation credits to offset the impacts to wetlands of the Palmetto Railways Naval Base Intermodal Facility and the WestEdge Foundation’s WestEdge Discovery District. Both entities are currently seeking permits from the U.S. Army Corps of Engineers.

Since 2013, OSI has protected more than 12,000 acres in South Carolina from the mountains to the sea.