This News protects
Land for Habitat
Land for Climate Protection 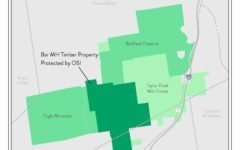 Towns of Chesterfield and Lewis, NY (December 21, 2020)—Building on more than three decades of protecting land in and around the Adirondack Park Preserve, the Open Space Institute (OSI) today announced the permanent protection of forested land in the Towns of Chesterfield and Lewis in Essex County. Comprised of hardwood and softwood forests, a variety of wetlands, and containing seven medium-sized peaks, the new acquisition furthers regional connectivity of protected lands and, through its protection and capture of carbon, aids in efforts to fight climate change.

Purchased from Bar MH Timber (NY) LLC for more than $2 million, the acquisition also provides land for wildlife habitat and public recreation. The protection of this property will help disperse visitors to the area by providing new access to the central Adirondack High Peaks trail systems.

Including this latest Bar MH Timber acquisition, OSI has now permanently protected, through direct acquisition and funding support, more than 7,700 acres in the area, including Bald Face Preserve, Poke-O-Moonshine Mountain, and Eagle Mountain. Together, these properties all connect to the protected lands of Taylor Pond Wild Forest and establish almost 10,000 acres of conserved contiguous forest in Essex County.

“The permanent protection of OSI’s Bar MH Timber property demonstrates the real value of protected land for people and for wildlife. Its protection is a critical step toward establishing regional connectivity of forested lands, fighting back against the impacts of climate change, and providing additional recreational opportunities for the public,” said Kim Elliman, president and CEO of OSI.

New York State Department of Environmental Conservation (NYS DEC) Commissioner Basil Seggos said, “Forest lands in the Adirondack Park benefit both our environment and the regional economy. By ensuring this land is protected, OSI is helping increase recreational access, protecting the watershed, securing wildlife habitat, and conserving diverse forest resources that are critical carbon-fighting tools in the fight against climate change. DEC congratulates OSI on a critical investment in the Eastern Adirondacks to ensure this valuable natural resource is protected for future generations to enjoy.”

Nationally, forests and other land sequester more than 15 percent of US carbon dioxide emissions each year, providing a natural climate solution that is helping in the fight against climate change. The Bar MH Timber acquisition will continue to capture additional carbon annually.

In 2019, forests in the United States stored 59 billion metric tons of carbon in trees, roots, soils, and forest products—the equivalent of more than 33 years of U.S. economy-wide emissions.

The Bar MH Timber property is ringed by seven medium stature mountains, making OSI’s most recent acquisition an ideal location for walking and hiking enthusiasts drawn to popular Adirondack peaks. In an effort to make more land available to the public for recreation, this OSI-protected property will be open for passive recreational use. OSI plans to coordinate with NYS DEC on potential trail development and ongoing management of the property.

The property is expected to be transferred to NYS DEC as an addition to Taylor Pond Wild Forest using funding from the Environmental Protection Fund (EPF).

About OSI in the Adirondacks

In the Adirondacks, OSI has protected more than 55,000 acres of land, including the historic Tahawus property, the village of Adirondac, and Split Rock Wildway wildlife corridor, and the addition of the Finch Pruyn Lands and Mount Treambleau to the Adirondack Forest Preserve.