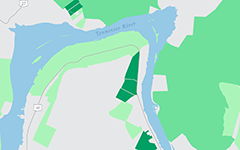 With the six properties' conservation, protected lands now span nearly 7 continuous miles along the south side of the Tennessee River

CHATTANOOGA, Tenn. (Dec. 17, 2019) —The Open Space Institute (OSI) and the Tennessee River Gorge Trust (TRGT) today announced the acquisition of six properties on the northern and southern banks of the Tennessee River Gorge. Just miles from downtown Chattanooga, the properties will lay the groundwork for future trails, while preserving habitat and connectivity for an iconic threatened plant species.

The six individual properties, totaling 409 acres and located in Marion County, TN, are on the western part of the river gorge, a canyon formed by the Tennessee River. The properties are home to beautiful waterfalls, mature forests, and high-quality streams, and will provide habitat for the federally threatened large-flowered skullcap, which is found only in Tennessee and Georgia.

In addition, two of the properties are adjacent to, and will be added to, Prentice Cooper State Forest, a popular recreation area west of Chattanooga that is used by hikers, rock climbers, hunters, and off-highway vehicles.

“The protection of these six properties is a phenomenal win for both the people and wildlife of the Chattanooga region and beyond,” said Peter Howell, executive vice president at OSI. “We commend the Tennessee River Gorge Trust on their tireless efforts to protect the lands, so that they could be conserved for future generations.”

In addition to OSI, the six newly-acquired tracts were also secured through generous support from the Tucker Foundation, the Pineapple Fund, a major anonymous gift, and the many other longstanding supporters of the Tennessee River Gorge Trust.

“Conservation efforts in the modern era are a partnership-driven process. We cannot successfully protect the special places within our community without the support of organizations like the Open Space Institute, the Tucker Foundation, and the countless other members of our community that give of themselves and their resources every day,” said Rick Huffines, executive director of TRGT, which has worked to protect over 17,000 acres — more than half of the 27,000 acres sought for preservation — in the gorge.

“These properties will be essential to future community access projects and our scientific understanding of this magical place,” Huffines said.

The 26-mile Tennessee River Gorge was formed when the Tennessee River carved through the Cumberland Plateau approximately 290 million years ago. The rugged landscape is rich with natural and cultural history with significant species, plant communities, and evidence of pre-European habitation. The gorge is home to globally significant plants and animals and provides a natural playground for Chattanoogans.