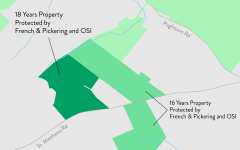 PHOENIXVILLE, Pa. (Dec. 15, 2020)—After two decades of effort, the French & Pickering Creeks Conservation Trust and the Open Space Institute (OSI) have permanently preserved more forests and farmland outside of Philadelphia. Conservation of the property also will help to protect drinking water for residents in the Delaware River Watershed.

The 54-acre “18 Years” property is so named because it took that long for local residents to protect the land from developers who had planned to erect 20 houses there. The land, located in West Vincent Township in northern Chester County, is partly wooded and partly farmed; the land drains into the Birchrun watershed, which empties into local Pickering Creek and in turn into the Delaware River.

OSI protected the land through its Delaware River Watershed Protection Fund, which conserves forested stream buffers bordering farmland along the headwaters of the Delaware River. These efforts help to safeguard drinking water for 15 million residents living in the watershed, including cities of Trenton, New Jersey; Wilmington, Delaware; and Philadelphia, Pennsylvania.

"By permanently protecting both drinking water and ensuring the continued economic opportunity for farmers to use the land, the 18 Years property is truly a success in every sense of the word," said Bill Rawlyk, OSI's Mid-Atlantic field coordinator. "We applaud the tireless efforts of French & Pickering Creeks Conservation Trust in successfully bringing this project to fruition.”

According to French & Pickering Conservation Director Pam Brown, “we are thrilled to accept the easement because 18 Years preserves farmland, streams, woods, trails and views, and helps protect an expanse of open space that improves the quality of water for our region.”

The 18 Years property is adjacent to the recently conserved 100-acre 16 Years property — also protected with the support of OSI — and provides a trail to the 1,100-acre Bryncoed Conserved Landscape and Preserve.

Conservation of both the 18 Years and 16 Years properties involves adoption of a farm conservation plan and protection of a wide buffer of natural vegetation on both sides of the streams that run through the farmland. When protected, these natural strips of land can filter out a significant percentage of silt and pollutants from agricultural operations.

In addition to OSI, the easement is funded by grants from Chester County Parks and Preservation, Pennsylvania Department of Conservation and Natural Resources, and West Vincent Township Open Space funds.