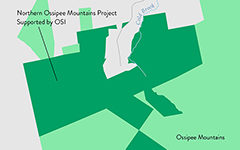 TAMWORTH, NH (April 19, 2019) – Grant support from the Open Space Institute’s (OSI) Resilient Landscapes Initiative has enabled the completion of a major land conservation and carbon sequestration project in the mountains of central New Hampshire. The project, by the Lakes Region Conservation Trust, also presents a unique and creative model for multiple owners of smaller parcels to share in the benefits of carbon offsets generated for the California cap-and-trade greenhouse gas reduction program.

Protected after more than a decade of effort, the 1,600-acre property includes scenic mountain summits and slopes, as well as working forests and pristine wilderness. The land also encompasses vernal pools and the water quality of Cold Brook. The brook is a tributary of the Bearcamp River, the largest tributary of Ossipee Lake — a popular vacation destination.

OSI provided a $200,000 grant from its Resilient Landscapes Initiative toward the $1.17 million project, building on an earlier “catalyst” grant from OSI to Lakes Region Conservation Trust to help the land trust build capacity in identifying and mapping climate-resilient lands — specifically, lands that will continue to serve as a refuge for sensitive plants and animals, even as the climate changes.

Across the Northeast, since 2014 OSI has partnered to conserve nearly 15,500 acres of climate-resilient lands.

“This project is a groundbreaking victory for local communities and residents, and the national effort to find creative solutions for the fight against climate change,” said Peter Howell, executive vice president of OSI. “We applaud the Lakes Region Conservation Trust for their successful efforts on this pioneering project.”

According to a recent study published in the Proceedings of the National Academy of Sciences (PNAS), the global carbon storage and reduction potential of several conservation, restoration and improved land management practices — including land conservation — could provide 37 percent of the cost-effective CO2 mitigation needed by 2030 for a greater than 66 percent chance of keeping warming below 2°C, the target agreed to at the 2015 Paris climate talks.

In the effort to create carbon offsets for the California cap-and-trade program, land conservation practitioners have struggled to aggregate lands that are large enough to sequester adequate amounts of carbon. To complete this project, the Lakes Region Conservation Trust aggregated carbon credits on the property with other lands that they own.

The conservation easement on the Ossipee Mountains property protects resilient landscapes naturally resistant to drought, flooding, and changing temperatures, as identified by The Nature Conservancy and OSI. It also protects significant areas of biodiversity and substantial wildlife habitat highly ranked by the New Hampshire Fish and Game Department.

The land is part of a 21,150-acre conserved landscape in the Ossipee Mountains, including thousands of acres already protected by Lakes Region Conservation Trust. The project has also been critical to the ongoing efforts towards creation of a habitat corridor connecting the Ossipees to the White Mountains.