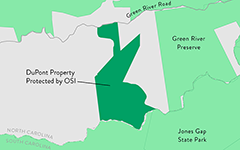 After a dozen years of effort, a key, climate-resilient property is saved, forever

HENDERSON & TRANSYLVANIA COUNTIES, NC (Feb. 13, 2019)—Grant support from the Open Space Institute (OSI) has led to the expansion of a North Carolina state forest called DuPont State Recreational Forest, along the North and South Carolina border. The land also expands a 100,000-acre corridor of conserved land, which will remain a haven for sensitive plants and animals, even as climate change occurs.

OSI’s grant went to Conserving Carolina for the protection of the 402-acre “Continental Divide” property. Conserving Carolina had been working to protect the land for a dozen years, during which time the land had a succession of owners, including a post-recession bank foreclosure.

“This project highlights the importance of land conservation in an era of climate change, not only for communities and recreation, but also for wildlife,” said Peter Howell, executive vice president of OSI. “This project broadens the connection between conserved lands in North and South Carolina, which will create critical havens for wildlife in the wake of climate change. We applaud Conserving Carolina’s efforts on this project and their overall commitment to this important landscape.”

In addition to OSI’s grant, funding for the 402 acres came from the N.C. Forest Service and generous private donations from Fred and Alice Stanback; Marilyn Westphal and Mark Simpson; and Maurice Loiselle and Karen Topol.