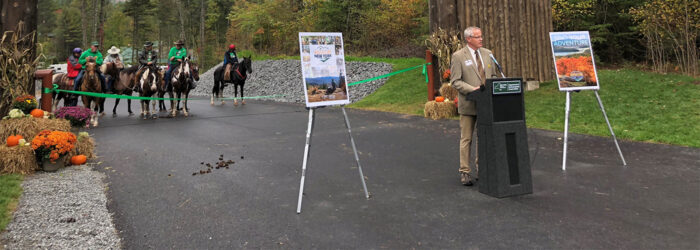 North Hudson, NY (October 4th, 2018)—The Open Space Institute joined with Governor Andrew Cuomo and State Office of Parks, Recreation, and Historic Preservation, and partners in celebrating the completion of phase one of the Frontier Town Campground Equestrian and Day Use Area. The new public campground facility, located on the site of the former Frontier Town theme park in the town of North Hudson, was constructed after OSI completed early groundwork and planning, turning the project from an abstract idea into concrete plans.

The first phase includes creation of: 91 campsites to accommodate a range of camping experiences; an equestrian camping area; parking for all-season trail access; a seasonal day-use area along the shoreline of the Schroon River with parking spaces, a pavilion, two playgrounds, a comfort station; and electric vehicle charging stations.

"Congratulations to Governor Cuomo and Commissioner Seggos on the opening of the Frontier Town Campground.  The Open Space Institute is proud to have helped jumpstart the campground design in keeping with our goals of improving public access, expanding recreational opportunities, and supporting local economies through this Gateway to the heart of the Adirondacks,” said Kim Elliman, OSI's president and CEO.

The Frontier Town Campground Equestrian and Day Use Area is a signature piece of the planned "Gateway to the Adirondacks.”

"North Hudson is a prime location to introduce visitors to all that the Adirondacks have to offer and encourage travelers to further explore New York's great outdoors," Governor Cuomo said. "With the first phase of the Gateway to the Adirondacks now complete, visitors can begin to experience this one-of-a-kind recreational site, helping to boost the local economy and the region's ever-growing tourism industry."

Plans for the campground were conceived in the OSI-supported Upper Hudson Recreation Hub Master Plan to establish a Gateway to the Adirondacks and to link local and regional outdoor recreation experiences in the Adirondack Park, bolster tourism, and strengthen the North Country's regional economy.

New York State and the Open Space Institute, working in collaboration with five neighboring Adirondack towns, engaged the Chazen Companies to create a blueprint for a new recreation hub to improve local amenities, expand access, and draw increased visitors to the park.

“OSI is vested in safeguarding the Adirondack's unique cultural, recreational and natural heritage, having protected nearly 30,000 acres over the past 25 years, and looks forward to continued advances in land conservation and the promotion of strategic recreation opportunities throughout this remarkable landscape," Elliman added.

DEC Commissioner Basil Seggos said, "For more than two decades, this magnificent property lay dormant, leaving a void in North Country communities and tourism economy. Governor Cuomo understands the power of the Adirondack mountains to draw outdoor enthusiasts from around the world to experience their unrivaled beauty. Completion of the first phase of the Gateway to the Adirondacks project at the former Frontier Town property is a significant first step towards realizing the Governor's vision to restore and transform the Adirondack Park into a global destination."

The Frontier Town Campground, Equestrian and Day Use Area is anticipated to be fully operational by summer of 2019.

The campground will connect to the existing trail network along NYS Route 9 and part of the Schroon Lake-North Hudson Snowmobile trail network known as the "Ti to Co Line Trail." The trails will provide connectivity to the Hammond Pond Wild Forest to the east, the Vanderwhacker Mountain Wild Forest and the Palmer Pond Bridge on the west, and the Essex Chain Lakes Complex.

“OSI is vested in safeguarding the Adirondack's unique cultural, recreational and natural heritage, having protected nearly 30,000 acres over the past 25 years, and looks forward to continued advances in land conservation and the promotion of strategic recreation opportunities throughout this remarkable landscape," Elliman added.

Randy Preston, Chairman, Essex County Board of Supervisors, and Town Supervisor, Town of Wilmington said, "This is the Biggest thing to happen to the southern Adirondacks in years. It will be a life line for the town of North Hudson all possible by the vision of DEC and the Governor."

More than 12.4 million people visited the Adirondacks region last year - over 460,000 visitors more than 2016, and a nearly 20 percent increase since 2011. Regional tourism generates more than $1.4 billion in direct visitor spending, including $178 million in State and local taxes, and supports more than 21,300 jobs across six counties.

The Open Space Institute protects scenic, natural and historic landscapes to provide public enjoyment, conserve habitat and working lands and sustain communities. Founded in 1974 to protect significant landscapes in New York State, OSI has been a partner in the protection of nearly 2.2 million acres in North America.

OSI has committed more than $23.5 million in the Adirondacks area over a span of 25 years, protecting more than 31,000 acres of land including the historic Tahawus property, the village of Adirondac, and Split Rock Wildway wildlife corridor, and the addition of the Finch Pruyn Lands and Mount Treambleau to the Adirondack Forest Preserve.