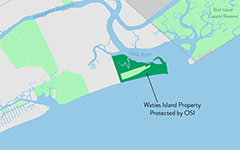 COLUMBIA, SC (Nov. 4, 2022) – The Open Space Institute (OSI) today announced the conservation of a key portion of one of the last stretches of undeveloped seashore near Myrtle Beach. Successful protection of the property marks the first victory of a newly created conservation fund launched exclusively for protecting South Carolina’s invaluable natural resources.

OSI protected the 260-acre property — blanketed by forests and high sand dunes, and home to an array of wildlife — earlier this year after staying the course with the landowner for over two years as she contended with a lawsuit spurred by last-minute, unforeseen title concerns. The land spans the northern third of Waties Island, in the middle of heavy development associated with the Grand Strand. OSI is holding the property until it can be transferred to the South Carolina Department of Natural Resources as a Heritage Trust Reserve.

Protection of the property was achieved in part due to support from the new Land and Water Action Fund, a first-of-its-kind fund in South Carolina. Launched by Sustain SC, the new fund will accelerate the protection of South Carolina’s most critical natural resources by combining county, state, and federal dollars with private-sector funding. Through the new fund, both Google and the Waccamaw Community Foundation contributed $500,000 in grants to OSI that were instrumental in the protection of Waties Island.

“The Sustain SC Fund is a long-waited and ground-breaking initiative, and Waties is a remarkable first project,” said Nate Berry, Senior Vice President of OSI. “We are honored to partner with Sustain SC and grateful for the generous contribution that will help OSI protect, forever, this stunning South Carolina barrier island.”

“We’re excited to contribute to the conservation efforts of Waties Island. It’s a unique, fragile environment and an important wildlife refuge,” said Ethel Bunch, Sustain SC’s Founder and CEO. “We are beyond grateful for the support launching this fund and hope it’s just the beginning of something that will truly make a difference for future generations.”

“This is a momentous announcement and Google is proud to be a part of it,” said Amber Tillman, Google's Head of Data Center Economic and Community Development. “We fully support Sustain SC’s mission with this fund and hope Google’s grant encourages others to take part in impactful conservation efforts for South Carolina.”

The conservation of this portion of Waties was also made possible by the careful stewardship and generosity of landowner Olivia Boyce-Abel, who sold her 260 acres of Waties Island to OSI at a considerable discount. OSI is committed to working with the remaining Waties’ landowners toward an equally successful result.

“I was never worried about the deal falling through because OSI has stayed steadfast throughout it all,” Boyce-Abel said.

The newly protected Waties Island property is located near the densely developed Cherry Grove neighborhood of North Myrtle Beach, close to the North Carolina state line. It is the only barrier island entirely in Horry County and, unlike the beach at Cherry Grove just across the tidal inlet, it remains in its natural state – without beach homes or condos. Its beachfront dunes are popular for horseback riding.