This News protects
Land for Clean Water
Land for Recreation 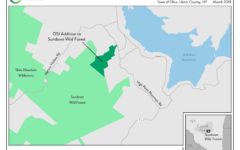 Located two minutes away from Route 28A in West Shokan, the newly conserved property consists of forested land along the east side of South Mountain, including a portion of the mountain’s summit. The property has the potential to serve as a new, eastern access point to South Mountain from High Point Mountain Road.

“Conserved land serves as a natural filter for cleaning and storing water. That is why strategic land conservation goes hand-in-hand with providing safe, reliable drinking water,” said Kim Elliman, president and CEO of OSI. “By protecting land in the Ashokan Reservoir watershed, we are securing an incredibly important water source for millions of New Yorkers.”

“With today’s announcement, Dr. Sam and Delia Adams have once again demonstrated their outstanding commitment to environmental stewardship and connecting people to the unique history and natural heritage of the Catskills,” said New York State Department of Environmental Conservation Commissioner Basil Seggos. “DEC congratulates the Open Space Institute on this critically important acquisition that protects critical drinking water sources for millions of New Yorkers and builds upon the state’s efforts to increase public access to the recreational opportunities within the Catskill Forest Preserve.”

The 261-acre South Mountain property is located in the Town of Olive, Ulster County and was purchased by OSI for $665,000 from Delia and Sam Adams.

“Thank you to OSI for ensuring that this property, which has been owned by my family since the Hardenberg Patent of the 1700s, will be preserved in perpetuity,” said Delia Adams. “My father’s foresight in protecting this property and my husband’s support guaranteed that the land will be inherited by future generations and enjoyed by everyone who loves the outdoors.”

The South Mountain property connects to other lands conserved by the New York City Department of Environmental Protection (DEP) to protect water quality.

More than 90 percent of New York City’s water supply comes from the Catskill and Delaware watershed, located more than 100 miles north of the city. Water is naturally filtered and cleaned by the land surrounding the Ashokan Reservoir before collecting in this basin, which has the capacity to hold 123 billion gallons.

OSI’s conservation of the South Mountain property will advance the efforts made by DEP to protect this critical water source. The protection of the land also lays the groundwork to create public access to two popular hiking destinations from a public road.

South Mountain rises 2,190 feet high near the west shore of the Ashokan Reservoir and is connected to the 3,091-foot Ashokan High Point Mountain by a ridgeline. The protection of South Mountain will not only create new access to these hikes, but will also open up additional wild areas to better welcome and disperse outdoors enthusiasts visiting from near and far.

Looking ahead, OSI intends to work with the New York State Department of Environmental Conservation (DEC) on transferring the land as an addition to the Catskill Park’s Sundown Wild Forest.