KINGSTREE, SC (May 27, 2020) — The Open Space Institute (OSI) today announced the protection of nearly 310 acres of wetlands and forests along the Black River. The completed project marks OSI’s sixth conservation victory along the celebrated river, and brings the total number of acres it has protected to more than 2,000.

Conservation of the “Hinds-Canada” property will provide new recreational offerings along the river, renowned for its magnificent paddling, birding, and fishing opportunities. Its protection will also support the restoration of wildlife habitat, while safeguarding local communities from flooding by protecting low-lying areas from development. The property also has historical significance as the site of a Revolutionary War battle.

“For generations to come, the Hinds-Canada property will be a priceless inheritance, protecting local communities from flooding threats while saving local taxpayer dollars, and creating recreational opportunities along the stunning Black River,” said Kim Elliman, OSI’s president and CEO. “We thank the South Carolina Conservation Bank, The Nature Conservancy, and the Black River Scenic Council for their tireless work to safeguard South Carolina’s scenic and natural resources.”

The Hinds-Canada property is the latest OSI project to be completed along the banks of the Black River, all within the Lower Pee Dee Watershed, which supplies drinking water for the City of Georgetown and the Grand Strand.

"With this conservation achievement, future generations can enjoy the abundant natural resources of the unique Hinds-Canada property, while it also mitigates flooding impacts,” said David Bishop, Coastal and Midlands Conservation Director at The Nature Conservancy. “This successful outcome is a model example of what can be accomplished when conservation partners dream big and come together around a shared vision."

Protection of the Hinds-Canada property is in line with a long-term strategic goal of local public and private partners working to protect floodplain parcels within the Lower Pee Dee Basin, which includes the Black River, in the wake of unprecedented and historic flooding over the past five years.

'For generations to come, the Hinds-Canada property will be a priceless inheritance, protecting local communities from flooding threats while saving local taxpayer dollars.' - Kim Elliman, OSI president and CEO

Conservation of the Hinds-Canada property will also help mitigate the loss of protected freshwater forested wetlands closer to the Atlantic coast and serve as a corridor for inland migration of freshwater tidal wetlands in the face of sea level rise.

In addition to its significance in a changing climate, the Hinds-Canada property contains soils ideal for future longleaf pine restoration. And, it presents existing habitat for birds — including waterfowl, resident and migratory songbirds, and wading birds — while providing the conditions to support federally threatened and endangered species, including swallow-tailed kite, wood stork, and Atlantic sturgeon.

Beyond its importance for habitat, the Hinds-Canada property is the site of the Revolutionary War’s “Battle of the Lower Bridge,” where Gen. Francis Marion and his men thwarted a British plan to invade Williamsburg County in 1781.

Looking ahead, OSI intends to allow public access on site. With its conservation, the property brings the total of acres conserved by OSI in South Carolina over the past five years to more than 15,000.

OSI-Protected Lands Along the Black River 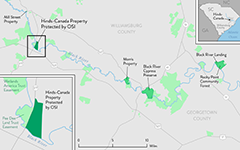