One of the Largest Undeveloped, Unprotected Sites on the Southeast Atlantic Coast Acquired for Conservation 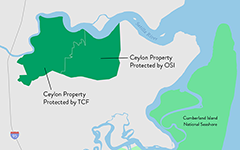 The Conservation Fund and OSI purchase more than 16,000 acres of critical coastal habitat in Georgia for future protection

CAMDEN COUNTY, Ga. — The Conservation Fund and Open Space Institute (OSI) announced today the purchase of the largest undeveloped, unprotected Atlantic coastline in Georgia. Each organization recently acquired a portion of the 16,083-acre Ceylon property located along the Satilla River east of the city of Woodbine. The Fund and OSI will work with the Georgia Department of Natural Resources (GA DNR) and federal agency partners over the next several years to permanently protect the entire property under conservation easements and transfer ownership to GA DNR for the establishment of a new wildlife management area.

“Natural lands of this size are rare, and the ecological importance of this property has made it a top priority for conservation over the last decade,” said Andrew Schock, Georgia state director at The Conservation Fund. “With the property’s proximity to Interstate 95 and the growing population centers along the Georgia and Florida coasts, it was highly threatened by resort, residential and commercial development. We are thrilled to secure this land, together with OSI, and look forward to working with Georgia DNR, Georgia's U.S. congressional delegation, and critical federal, state and private funding partners to permanently protect it.”

“Protection of the Ceylon property represents a trailblazing achievement in large-scale land conservation for the state of Georgia and the greater Southeast,” said Kim Elliman, OSI’s president and CEO. “We are grateful for the support of the Wyss Foundation. We also thank The Bobolink Foundation and The Nature Conservancy as well as our partners The Conservation Fund and the Georgia Department of Natural Resources for their tireless efforts on behalf of protecting coastal Georgia.”

“Permanent protection of the Ceylon property represents a trailblazing achievement in large-scale land conservation for the state of Georgia and the greater Southeast,” said Kim Elliman, OSI’s president and CEO.

Ceylon features a remarkable mix of salt marsh, maritime forest, and fire‐adapted longleaf pine upland habitats and is one of the most important properties for gopher tortoises in Georgia. GA DNR estimates the overall tortoise population size on-site at more than 2,000 individuals, potentially representing more than one viable population. Of the 122 viable gopher tortoise populations in the state, GA DNR aims to permanently protect 65 to potentially prevent the need to federally list the gopher tortoise, as well as numerous other threatened and endangered species that depend on the same habitat. Seen as a keystone species, the gopher tortoise’s burrows provide shelter for roughly 350 other wildlife species.

The property is also home to eastern indigo snakes and has been identified by the U.S. Fish and Wildlife Service (USFWS) as a recovery site for the country’s largest snake species, which is federally threatened.

The Conservation Fund negotiated a contract with the sellers and secured the purchase of the more than 16,000-acre property in the summer of 2019; OSI joined as a project partner in the fall of 2019.

Upon closing, The Conservation Fund will own 8,555 acres thanks to a series of private, zero-percent interest loans, a grant from Robert W. Woodruff Foundation and additional philanthropic grants secured by partners, including The Nature Conservancy. OSI will own 7,528 acres of the property with funding through its Eastern Lands Initiative, with support of the Wyss Foundation. Both OSI and The Conservation Fund received funding from The Nature Conservancy; this funding included grants from the Bobolink Foundation and several other private supporters.

During the interim ownership, OSI and The Conservation Fund will work with GA DNR to restore gopher tortoise and longleaf pine habitat on the lands and make them available for public use, possibly as early as Spring 2020 for turkey hunting.

The Ceylon property is also one of the most important conservation priorities for the nearby Naval Submarine Base Kings Bay, the East Coast’s only nuclear submarine base. This collaborative effort will protect the land from incompatible use and development.

The permanent protection of the Ceylon tract will depend on funding and support from various federal, state and private sources. Funding will be sought from federal programs authorized and/or funded by the U.S. Congress, including Georgia’s delegation representing this project—U.S. Senator Johnny Isakson, U.S. Senator David Perdue, and U.S. Representative Buddy Carter. These programs will consist of the Department of Defense’s Readiness and Environmental Protection Integration (REPI) program; U.S. Forest Service’s Forest Legacy Program, through the Land and Water Conservation Fund (LWCF); USFWS’s Recovery Land Acquisition Grants program, provided through the LWCF; USFWS’s National Coastal Wetlands Conservation Grant program; and the USFWS’s North American Wetlands Conservation Act program. State and private funding sources for the project will include the Georgia Outdoor Stewardship Program; Robert W. Woodruff Foundation; Bobolink Foundation and other private donors through The Nature Conservancy; and the Knobloch Family Foundation.