BLAIRSTOWN, NJ (Dec. 28, 2021)—The Open Space Institute (OSI) and The Land Conservancy of New Jersey (TLCNJ) today announced the conservation of additional land for a key western New Jersey preserve. Protection of the property, which lies along the Appalachian Mountain range, safeguards precious forests within the region that filter drinking water and store carbon.

With its protection, the 57-acre property has now been added to TLCNJ’s Yards Creek Preserve, expanding the Preserve to 286 acres. Featuring mature forests of oak and hickory, the property is the fifth addition to Yards Creek Preserve supported by OSI; the previous OSI-protected additions to the preserve total some 270 acres and include the 57-acre “Ascolese” and 21-acre “Clark” properties.

“The successful conservation of this property for the Yards Creek Preserve is a resounding victory for forestland conservation of climate and clean water,” said Bill Rawlyk, OSI’s Mid-Atlantic Field Coordinator. “OSI applauds The Land Conservancy of New Jersey for its tireless efforts to achieve the protection of this critical property.”

The Appalachian Landscapes Protection Fund is a first-of-its-kind Fund launched by OSI in 2021 to respond to the twin crises of climate change and biodiversity loss, and to support more equitable approaches to land conservation. Capitalized by the Doris Duke Charitable Foundation, OSI’s Fund focuses on protection of forests along the spine of the Appalachian Mountains, home of the world’s largest broadleaf forest. This region plays an irreplaceable role in storing the nation’s forest carbon and providing essential climate refuge for plants and animals.

The Delaware River Watershed Protection Fund — made possible by the William Penn Foundation — seeks to harness land protection to ensure abundant, clean water within the 13,000 square mile drainage of the Delaware River. Fifteen million people rely on the watershed for drinking water including residents of the cities of Trenton, Philadelphia, Wilmington, and New York City.

Since its creation in 2014, the Delaware River Watershed Protection Fund has supported roughly 57 capital land protection projects, conserving over 22,350 acres that filter water within the Delaware Basin.

“It is a pleasure to work on land preservation in Blairstown, where residents, leaders, and landowners all seem to have a conservation ethic,” said Sandy Urgo, TLCNJ Vice President of Land Preservation. “Since its inception, Yards Creek Preserve has been warmly welcomed by our many neighbors. We especially appreciate Wes Jones working with us to preserve his land and add it to the preserve, as well as the generous contributions from all of our funders. This land sits high in the landscape, it is a lovely forest with many beautiful mature hickories and other tree species and is very worthy of protection.”

Established in 2019, Yards Creek Preserve is an ambitious conservation project by TLCNJ to safeguard forests that will help protect drinking water for the Delaware River Watershed, while curbing encroaching development. The Preserve also lies within a web of 76,000 acres of public land, that is part of the Delaware Water Gap National Recreation Area. 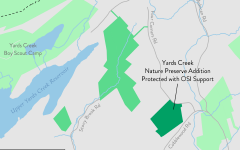