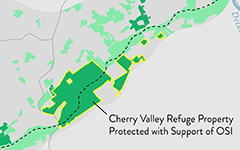 The acquisition, which secures more than five miles that buffers the Appalachian Trail, was also funded by the Land and Water Conservation Fund (LWCF), the nation’s most important conservation program.

The property was selected for funding by OSI through its Delaware River Watershed Initiative, funded by the William Penn Foundation, and its Northeast Resilient Landscapes Fund, capitalized by the Doris Duke Charitable Foundation.

The newly-conserved property protects forests that filter water draining into the Delaware River. More than 15 million people rely on the river for drinking water, including residents of Philadelphia, PA, and Trenton, NJ. Additionally, the property flanks the Kittatinny Ridge, a critical north-south migration corridor for species in response to climate change.

“This project is a thrilling victory in the effort to protect the forested source waters of the greater Delaware River, and the places that will continue to provide a haven for wildlife, even as the climate changes,” said Peter Howell, executive vice president of OSI. “It also represents the latest success in a longstanding effort to protect the Cherry Valley National Wildlife Refuge. We applaud the efforts of The Conservation Fund, along with its many partners including the U.S. Fish and Wildlife Service and the National Park Service, in bringing this effort to fruition.”

“With recreational assets like the Appalachian Trail and the added benefits of watershed protection and wildlife habitat, this property offers a wealth of opportunity to both nature and people” said Kyle Shenk, Pennsylvania State Director for The Conservation Fund, which led the effort to conserve the property. “It’s a joy to celebrate this milestone with our partners and open up these lands for the public to enjoy.”

Cherry Valley NWR’s important forestlands support migratory bird habitat along the Kittatinny Ridge. The NWR is open for public recreation and acts as a key driver for recreational tourism in Northampton and Monroe Counties.

The Appalachian Trail runs approximately 2,200 miles from Maine to Georgia and is the world’s longest hiking-only trail. Although the trail itself is conserved, in some places along its route only the narrow footpath itself is protected with minimal or no buffer.

The final phase of this conservation effort was made possible in part with funding from the federal Land and Water Conservation Fund—a bipartisan, federal program that uses a percentage of offshore drilling revenue to fund onshore conservation projects at no cost to taxpayers.

In addition to OSI and LWCF, voluntary mitigation dollars from Williams Companies; a grant from Pennsylvania’s Keystone Recreation, Park and Conservation Fund; and additional private support conserved the land.

Opened in 2008, Cherry Valley National Wildlife Refuge was established in part to ensure the protection of the federally-listed threatened bog turtle, which can be found in wetlands throughout the valley. The new Refuge lands are an important part of Pennsylvania’s largest Important Bird Area, a globally-significant fall migration flyway used by tens of thousands of raptors and vultures and millions of songbirds. In addition, the forest habitat is one of the highest ranking in a statewide forest priority assessment, supporting breeding populations of cerulean warblers and other neo-tropical migratory bird species.

LWCF is responsible for protecting parks, wildlife refuges and recreation areas at the federal, state and local levels. For 55 years, it has provided critical funding for land and water conservation projects, recreational construction and activities and the continued historic preservation our nation’s iconic landmarks from coast-to-coast.

Since its creation in 2014, OSI’s Delaware River Watershed Protection Fund has supported roughly 50 land protection projects that are slated to conserve over 21,000 acres of lands that filter water within the Delaware Basin.

OSI’s Resilient Landscapes Initiative, created in 2013, has approved grants for 61 projects which are on target to protect more than 52,000 acres along the eastern seaboard.