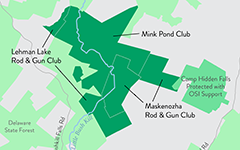 PIKE COUNTY, Pa. (Dec. 3, 2019) – The Open Space Institute (OSI) and the Delaware Highlands Conservancy today announced the permanent protection of thousands of contiguous, unfragmented acres in the Poconos region of eastern Pennsylvania. The project protects both headwater streams essential for drinking water, as well as habitat critical for sustaining diverse wildlife species in the face of climate change.

OSI’s support of the project, which contains over ten miles of headwater streams designated as “High Quality” by the State of Pennsylvania, was made possible through its Delaware River Watershed Protection Fund. OSI also supported the project through its Resilient Landscapes Initiative in recognition of the property’s climate resilience: because the land flanks the Delaware River and Kittatinny Ridge, it lies at a critical pinch-point on the resilient Appalachian corridor and is essential for regional migration and movement of wildlife species.

“The protection of these three properties is an historic achievement for these three local hunting and fishing clubs, which are themselves longtime, ardent champions of environmental protection within the Poconos,” said Peter Howell, OSI’s executive vice president. “But the significance of this milestone is much broader as conservation of their lands will protect forests and cold water streams that provide clean drinking water for cities downstream on the Delaware River including Philadelphia, Trenton, and Wilmington, as well as diverse geology and habitats critical for supporting species as the climate changes. We congratulate our partner the Delaware Highlands Conservancy on their dogged, decade-long effort to see this project come to fruition.”

Spanning some tens of thousands of acres, private hunting and fishing clubs are a decades-long fixture of the Poconos region and contain pristine forests and streams critical for watershed and climate resilience within the larger region. However, as the clubs’ members age, many of the properties are in danger of becoming subdivided and developed. Conservation of the natural lands held by these three clubs is a pioneering achievement in the larger effort to protect these natural lands for future generations.

“The Delaware Highlands Conservancy thanks everyone involved in this project over the past thirteen years: the generous funders who made it possible, the Pennsylvania Department of Conservation and Natural Resources, and the leadership and members of Mink Pond, Maskenozha, and Lehman Lake hunt clubs for their investment in the future of our region,” stated Diane Rosencrance, Executive Director of the Delaware Highlands Conservancy.

In addition to $1.1 million through OSI grant funds, the Land and Water Conservation Fund of the U.S. Forest Service's Forest Legacy Program allocated $3.33 million toward the Northeast Connection project to permanently protect these three properties with conservation easements.

OSI’s Resilient Landscapes Initiative is made possible with funding from the Doris Duke Charitable Foundation. The Initiative, created in 2013, has approved grants for 61 projects which are on target to protect more than 52,000 acres along the eastern seaboard.