LONG POND, Pa. (Jan. 16, 2023)—Thanks in part to two grants totaling more than $1.25 million from the Open Space Institute (OSI), more than 1,000 acres in eastern Pennsylvania will now be permanently protected and publicly accessible. Conservation of the land will support climate protection and forest carbon storage, while ensuring clean drinking water within the larger Delaware River Watershed.

The property, which totals 1,071 acres and was secured by The Nature Conservancy, has been transferred to the Pennsylvania Game Commission as an addition to State Game Land 180. Abutting existing protected land, the newly conserved land is now part of a 43-mile corridor of protected lands.

The project was made possible with financial support from two OSI Funds: the Delaware River Watershed Protection Fund and the Appalachian Landscapes Protection Fund.

“The Open Space Institute is exceptionally proud of its role in protecting Shohola Creek, which will provide public access and recreation while safeguarding critical water resources and unspoiled carbon-absorbing forests – especially critical in the face of a changing climate,” said Bill Rawlyk, OSI’s Mid-Atlantic field coordinator. “We applaud our partners at The Nature Conservancy for their vision and commitment to protecting this important land.”

Support for the project also included funding from OSI’s Appalachian Landscapes Protection Fund, capitalized by funders including the Doris Duke Charitable Foundation and the William Penn Foundation. The Appalachian Landscapes Protection Fund supports land protection along the Appalachian Mountain range, an area that is home to the world’s largest broadleaf forest, stores most of the nation’s forest carbon, and provides an essential refuge and migration routes for plants and animals at risk of habitat loss from climate change.

Located downstream of Shohola Lake, the property contains more than a mile of frontage on Shohola Creek and six tributary streams. The land is also home to Bald Hill, which provides habitats for several threatened plant and animal species of concern.

In addition to OSI, the State of Pennsylvania, Kentfields Foundation, and Pike County Commissioners also supported the project. 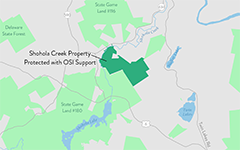