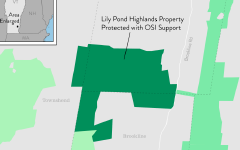 With its protection, the forests will be allowed to mature to old growth — catalyzing its ability to store a significant amount of carbon

ATHENS, BROOKLINE, & TOWNSEND, VT (May 19, 2022)—With the support of the Open Space Institute (OSI), more than 600 critical forest acres have been protected along a popular scenic ridgeline in southern Vermont. Conservation of the land secures an important area resource for climate protection and forest carbon storage, prime habitat for sensitive plants and animals, and portions of a beloved ridgeline trail.

The “Lily Pond Highlands” property was protected by the Windmill Hill Pinnacle Association (WHPA). Vermont Land Trust (VLT) and Vermont Housing and Conservation Board, both project supporters, now co-hold a conservation easement on the land. Spanning the towns of Athens, Brookline, and Townsend, the newly protected land contains forest habitat for the wood turtle, which is declining in the region, as well as six state-significant vernal pools for amphibian breeding grounds.

Lily Pond Highlands is the fourth Windmill Hill ridgeline property protected with funding from OSI, and the first supported by OSI’s Appalachian Landscapes Protection Fund (ALPF). Launched last year, the $18 million ALPF seeks to respond to the twin crises of biodiversity loss and climate change by specifically targeting forested areas along the Appalachian Mountains. These forests play the irreplaceable role of storing a majority of U.S. forest carbon, containing the world’s largest broadleaf forest, and providing essential climate refuge for plants and animals.

“The successful conservation of Lily Pond Highlands is an exciting achievement for long-term efforts to protect the forests of the Northern Appalachian mountain region in the face of a changing climate," said Jennifer Melville, vice president at OSI. "We applaud the Windmill Hill Pinnacle Association for their efforts to permanently protect this critical land which will provide long-term benefits for people and wildlife.”

Along the Windmill Hill ridgeline, OSI previously supported the conservation of the 144-acre Salmon Brook property by VLT and Putney Mountain Association (PMA) in 2014; the 506-acre Black Mountain property by The Nature Conservancy in 2015; and the 161-acre Putney Mountain property by VLT and PMA in 2018. Together with the Lily Pond Highlands property, these properties build on an assemblage of conserved land totaling more than 3,400 acres that play a critical role in storing carbon in the face of climate change.

Looking ahead, WHPA's management goal for the Lily Pond Highlands property is to allow the forest to mature into old growth conditions and catalyze its ability to store a significant amount of carbon. Such mature woodlands will also provide old forest habitat that is underrepresented in the region and will support a diverse range of plants and animals.