New York, NY (May 25, 2022)— The Open Space Institute (OSI) today announced that its historic, 212-acre Adirondac Upper Works Property in Newcomb, NY welcomed 19,650 visitors in 2021. Since the official unveiling last year of a suite of trail and parking area renovations aimed at improving public access at the site, OSI has continued to make enhancements that better welcome and guide visitors to the area, including the installation of additional wayfinding signage and planning for the rehabilitation of MacNaughton Cottage. The number of visitors underscores the critical role improving and protecting lands plays in helping to increase public access to some of the Adirondack’s most remote and popular destinations, like the High Peaks Wilderness Area, and spurring economic activity by driving traffic to community restaurants and local stores.

With the first phase of improvements completed at its Adirondac Upper Works site, this month OSI is advancing a long-anticipated planning initiative for the rehabilitation of MacNaughton Cottage. OSI has started a planning, engineering, and design process with the goal of beginning construction on the structure in 2023. Potential future uses for the cottage include space for visitor information, educational and recreational programming, seasonal housing for interns, equipment rentals, and a visitor contact station for forest rangers.

“OSI's construction and expansion of the Upper Works Trailhead last year resulted in better dispersement of explorers, improved public safety and navigation, and the protection of some of the region’s most precious natural resources. These next upgrades will enrich the visitor experience by providing additional amenities and highlighting the rich history of the landscape,” said Kim Elliman, president and CEO at OSI. “Access to nature continues to be a key priority for New Yorkers, evidenced by strong park visitation numbers throughout the state, meaning these improvements are supporting on-the-ground needs.”

With an increasing number of visitors arriving at the Upper Works property to access the High Peaks, paddle across Henderson Lake, or explore the interpretive trail that guides visitors through the former Village of Adirondac, OSI’s planned enhancements of the historic MacNaughton Cottage will further improve visitor orientation and enjoyment of the site, promote tourism, and preserve the region’s historic and natural assets. The improvements also ensure the OSI property can accommodate the increasing number of visitors seeking access to the popular High Peaks Wilderness Area – and in doing so, better disperse hikers and protect the region’s trails and precious natural resources.

Elliman noted that the completed and future improvements to the site are accomplished thanks to the support of generous donors and public-private partnerships, “Thanks to our partnerships with the Town of Newcomb and the New York State Department of Environmental Conservation and the generosity of our donors, OSI is transforming this site so that visitors will be able to fully appreciate, learn about, and enjoy this unparalleled landscape.”

OSI is pursuing additional partnerships, private funds, and grants to fully achieve the renovation of MacNaughton Cottage and the final phases of its ambitious plan, which would further enhance the Adirondac Upper Works property, improve visitor orientation and enjoyment, and preserve the region’s historic and natural assets.

History of the Land
Recognizing the historic and environmental importance of this spectacular landscape located in the heart of the Adirondack Park, OSI acquired the 10,000-acre Tahawus tract in 2003. OSI then transferred most of the property to the New York State Department of Environmental Conservation as an addition to the High Peaks Wilderness Area, retaining the 212-acre Adirondac Upper Works for educational, historic, and recreational purposes.

Since then, OSI, with support from the Prospect Hill Foundation, the Overhills Foundation, the Cloudsplitter Foundation, the Walbridge Foundation, and New York State, has invested nearly $1.3 million in improvements at the Adirondac Upper Works, including site planning; the stabilization of the blast furnace; the creation of an interpretive trail that guides visitors through the former Village of Adirondac to the historic 1854 Blast Furnace; the structural preservation of MacNaughton Cottage; and the relocation and construction of the new parking area. Built in 1834, MacNaughton Cottage is the site from which then Vice President Theodore Roosevelt received word that President William McKinley was dying and began his famous “midnight ride” to the presidency in 1901.

Attracting hundreds of thousands of visitors annually, the High Peaks Wilderness Area is the best known, most heavily used, and largest Forest Preserve unit in the Adirondack Park. Increased visitation to the High Peaks over the past few years is providing an economic boon in certain Adirondack communities.

In addition to providing an alternative southern access to the High Peaks, OSI is seeking additional solutions to improve recreational access while protecting the park and preserving its cultural and natural resources. Recent and ongoing land protection projects include Tub Mill Pond and Trembleau Mountain in Essex County, Hans Creek in Saratoga County, the Boeselager Working Forest Additions in Clinton County, and Huckleberry Mountain in Warren County, among others. 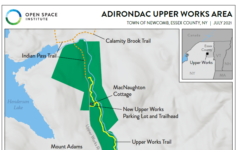