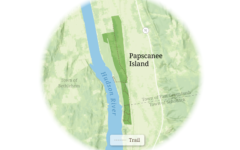 East Greenbush, NY (May 9, 2021)— The Papscanee Island Nature Preserve has been returned to the Stockbridge-Munsee Community, facilitating ancestral ownership of the property which will be resumed and maintained into the future. Prior to its transfer, Papscanee Island had been a protected property of the Open Space Institute, having saved it from development in the 1990s. The return of the land is a celebration and acknowledgment of the Stockbridge-Munsee Community’s rich history, cultural resilience, and commitment to stewardship during and beyond this important moment of historical reckoning.

A multimedia Story Map exploring the history of Papscanee Island and the centuries-long effort of the Stockbridge-Munsee Community to reclaim the land.

Papscanee Island Nature Preserve is located along the Hudson River, directly across from downtown Albany, and is easily accessible from the City of Rensselaer, East Greenbush, and Schodack from Route 9J. The 156-acre property offers three miles of scenic trails that wind through the forested landscape, including trails that access the Hudson River.

With the land transferred to the Stockbridge-Munsee Community, the property will continue to function as a nature preserve. A conservation easement will permanently protect the land and an arrangement with Rensselaer County and the Rensselaer Land Trust will keep the trails maintained and open for public enjoyment.

The Stockbridge-Munsee Band of Mohican Indians, also known as the Mohican Nation, is the federally recognized tribe whose ancestors lived on the land that now comprises the Papscanee Island Nature Preserve prior to Dutch colonization. The Mohican community derive their name from their word for the Hudson River, the Mahhicannituck, which translates as the “river that flows both ways” or the “waters that are never still.”

“The Mohican Nation thanks Open Space Institute for this exciting opportunity to reestablish a connection to an important cultural site in its ancestral territory. We also look forward to working with Rensselaer County and the Rensselaer Land Trust to manage the property in a way that protects cultural resources as well as allowing for public access and enjoyment of the property,” said the Stockbridge-Munsee Community President Shannon Holsey.

“The return of Papscanee Island Preserve is an acknowledgement of the Stockbridge-Munsee Community’s historic connection to this property, and of the bitter history of land dispossession and land policies that not only removed Mohican ancestors from this homeland but also brutalized and segregated generations of those who originally inhabited our nation,” said Kim Elliman, president and CEO of the Open Space Institute. “While we recognize that our human histories and experiences are dramatically different, our love and careful stewardship of this land over the past 25 years is shared with the Mohican Nation. We are grateful for the opportunity to work with them and hope that this project will inspire a greater understanding and appreciation for ancient and current Mohican land policies.”

“The Rensselaer County Legislature has had the privilege of managing the Papscanee Preserve for the Open Space Institute for over 20 years. Our Environmental Management Council has maintained the trails and the shoreline for thousands of recreational hikers that have enjoyed the pristine and historic lands along the Hudson River. We look forward to continuing to work with the Mohican Tribe to keep this important area open for public enjoyment,” said Michael Stammel, Chairman of the Rensselaer County Legislature.

“We are pleased and honored to be conserving Papscanee Island Nature Preserve with the Stockbridge Munsee Community and continuing to make it available to the community,” said Rensselaer Land Trust Executive Director John Winter. “We wish to thank Open State Institute for entrusting us with this responsibility. We look forward to helping ensure that this sacred and special place is always protected.”

Based on reservation lands in Shawano County, Wisconsin, the Stockbridge-Munsee Tribal Council plans to work with Rensselaer County and the Rensselaer Land Trust, which will hold the land conservation agreement that permanently protects the property from development. OSI intends to partner with the Stockbridge Munsee Community to create new signage for the nature preserve that will better reflect the history and current ownership of the land.

Papscanee Island Nature Preserve includes a significant portion of floodplain wetlands and deciduous woodlands. Numerous federally endangered species, and species critically imperiled in New York State have been identified on or in the immediate vicinity of the property.

Parts of Papscanee Island Nature Preserve serve as the northern most wetland area for the Hudson River estuary and the land is critical to maintaining water quality and filtering rainwater before it enters the Hudson River.

History of the Land

Papscanee Island Nature Preserve is a site of tremendous cultural significance for the Mohican Nation.

Mohican tribal history and archaeological evidence indicate that the land was used by indigenous people for thousands of years as a village site. Near the Hudson River, the land provided access to rich marine resources and contained some of the most productive agricultural fields in the Mohican homeland.

On April 13, 1637, the heirs of Sachem Papsickene signed a deed transferring the land where the nature preserve sits to Dutch diamond merchant Kiliaen Van Rensselaer, a founding member of the Dutch West India Company. It was the third sale of land by Mohican people to the Dutch; payment was made in the form of duffels, axes, knives, and wampum. The land was immediately settled and farmed by Dutch tenants and has been in continuous cultivation ever since.

By the 1730s, the Mohicans, after suffering much dispossession of land in the Hudson Valley, accepted an offer to relocate to Stockbridge, MA, which was also part of their traditional territory on the Housatonic River. Though they fought with the Americans in the Revolutionary War, they were forced to move from their lands in Stockbridge shortly after the war was won. The Mohican community then settled in central New York on lands provided by the Oneida community in Stockbridge. By the 1820s, many indigenous communities were again forced further West as their land was stolen by New York settlers, and the Stockbridge Mohican community relocated again and eventually secured lands in today’s Bowler, Wisconsin.

Nearly thirty years ago, OSI purchased the property to protect it from development through a series of three transactions totaling almost half a million dollars. Prior to OSI’s involvement, the land was intended to be included as part of an expansion of the costal industrial Port of Rensselaer. OSI partnered with Rensselaer County to create the Papscanee Island Nature Preserve, with the county managing the Preserve for more than two decades.

The Preserve has served as a refuge for people, rare plants, and wildlife and this green, natural landscape starkly contrasts with the surrounding industrial landscape.

In 2009, Papscanee Island was identified as eligible for inclusion in the National Register of Historic Places as a place worthy of preservation because of its historical and archaeological significance of the site as the center of life for the Mohican tribe; its direct association with Sachem Papscanee; and, because the land was permanently protected from development by OSI, the property has retained an aesthetic character that would have been familiar to Sachem Papsichene and his people. OSI's donation of Papscanee Island will allow the Stockbridge Munsee Community to push forward their application for the land to be nominated as a Traditional Cultural Property and officially listed on the national register.

In 2018, the Stockbridge Munsee Community and OSI, in partnership with the NYS Museum, completed an archaeological survey on a portion of the property using non-destructive geophysical techniques like magnetic susceptibility and ground penetrating radar. In addition to offering new insights into the Mohican history of the property, this research is helping scientists better understand the lives and roles of enslaved people at the site during the 17th and 18th centuries as part of the NYS Museum’s Archaeology of Slavery in the Hudson Valley project.

About the Stockbridge Munsee Community

The Stockbridge-Munsee Community is a federally recognized Tribe situated on Reservation in Shawano County, North central Wisconsin. The Tribe’s ancestral homelands span the Hudson River Valley in what are now the states of New York, Vermont, Massachusetts, Connecticut, New Jersey, and Pennsylvania before the Tribe was removed Westward during the nineteenth century. The Nation moved to what are now the towns of Red Springs and Bartelme in Shawano County Wisconsin as a result of the Treaty of 1856. Approximately half of the 1,500 members of the Stockbridge-Munsee currently live on or near the reservation which has several thriving businesses including the Stockbridge-Munsee Health and Wellness Center, Mohican North Star Casino, and Pine Hills Golf Course. More information at www.mohican.com.

The Open Space Institute protects scenic, natural, and historic landscapes to provide public enjoyment, conserve habitat and working lands and sustain communities. Founded in 1974 to protect significant landscapes in New York State, OSI has been a partner in the protection of nearly 2.3 million acres in North America.

In and around the Capital District, OSI has protected more than 12,000 acres of parks and farmland. Over the past 30 years, OSI has doubled the size of John Boyd Thacher and Moreau Lake State Parks, protected the Indian Ladder and Hand Melon Farms, successfully partnered with the National Park Service to protect President Van Buren’s former estate and six nearby farms in the Kinderhook Creek corridor, and is creating habitat for the endangered Karner Blue butterfly. In 2018, OSI joined with the state in the opening of the Thacher Park Center, for which OSI raised more than $800,000. Learn more about OSI online at: www.openspaceinstitute.org.