Partnership with Open Space Institute maintains potential for commercial rail use and allows for future creation of a 30-mile four-season, multi-use recreational trail.

WARREN COUNTY, NY (Dec. 21, 2022)—Revolution Rail Co. (RevRail) today announced its purchase of the Saratoga and North Creek Railway, which stretches from the hamlet of North Creek, Warren County, north to the Tahawus mining works in the Town of Newcomb, Essex County. The North Creek railbiking company’s bankruptcy purchase of 30 miles of a rail line right-of-way allows RevRail to continue Railbiking tours out of its North River launch, with the hope of expanding its operations from the Tahawus mine toward the scenic Opalescent River—while providing rail services upon request to area freight shippers, in adherence to its Federal Common Carrier obligation.

“Our business model relies on bringing railbike tours through naturally beautiful and historic railroad tracks around the country; our stewardship of the Tahawus branch will be in keeping with this mission,” according to RevRail’s founder, Robert Harte.

The purchase coincides with an announcement by RevRail and the Open Space Institute (OSI) that, in the event commercial freight demand does not materialize after several years, the two entities will work with local officials, the Surface Transportation Board, and the Department of Environmental Conservation to determine the future of the line, which has the potential to be a transformative four-season, multi-use recreational trail.

“By partnering with Revolution Rail, OSI has met its long-term recreational and conservation goals of creating the opportunity to pursue a world-class, year-round destination greenway and ensure that the line will never again be used for the storage of aging rail cars,” said Kim Elliman, president and CEO of OSI. “We look forward to our partnership with Revolution Rail and to continuing to work with local and state leaders to promote the region’s economic prosperity, protect its natural resources, and preserve its character.”

“Revolution Rail’s acquisition of the former Saratoga North Creek Rail Line and its partnership with the Open Space Institute allow for continued commercial rail service on the line. The purchase may also provide an option for multi-use recreational trails for snowmobiling and hiking. While many details remain to be worked out, I am encouraged by the balance struck by this partnership between potential future use of the railroad and the environmental restoration of the Village of Tahawus, which I have been advocating for since 2018,” said Newcomb Town Supervisor, Robin DeLoria.

The purchase of the bankrupt rail line occurred after the original high bidder for the property was disqualified. RevRail, which was the next high bidder at the live auction that occurred in March, negotiated the $2.7 million sale price with the bankruptcy plan administrator. The sale of the former rail line has been approved by the Surface Transportation Board. As part of the agreement, RevRail will maintain common carrier status.

Revolution Rail began running railbike excursions in 2017 on the historic Sanford Lake branch in the Adirondack Mountains of upstate New York. We call this tour the North Bridge Run. It takes riders under a canopy of trees along the Hudson River before passing over a 250-foot-long trestle bridge and resting along the idyllic Boreas River. Revolution Rail Co. serves as an immersive ecotourism operation that creates new ways to utilize scenic and historic railroad tracks to entertain, inspire, and educate our guests. Pedaling our two and four-passenger handcrafted railbikes, guests transport themselves on a guided journey through nature. Our adventures are truly for all ages and abilities as we have had riders from three weeks to 97 years old. In addition to our New York location, we operate in New Jersey and Colorado and are always looking to expand to other locations. You can find out more about our tours at www.revrail.com.

About OSI and Its Work in the Adirondacks

The Open Space Institute (OSI) protects scenic, natural, and historic landscapes to provide public enjoyment, conserve habitat, and sustain communities. Founded in 1974 to protect significant landscapes in New York State, today OSI has been a partner in the protection of nearly 2.3 million acres in North America.

In the Adirondacks, OSI has protected more than 55,000 acres, including the historic Tahawus property, the village of Adirondac, and Split Rock Wildway wildlife corridor, and the addition of the Finch Pruyn Lands and Mount Treambleau to the Adirondack Forest Preserve.

Today, OSI manages the 212-acre Adirondac Upper Works property as a southern access point to the High Peaks Wilderness Area. Over the past decades, OSI has invested $1.3 million to make the property more welcoming and protect its historic features, including the creation of a new parking area and trail head, stabilization of the blast furnace, creation of an interpretive trail through the former village of Adirondac, and structural preservation of MacNaughton Cottage. 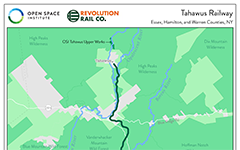