Pappas Island protected from development; will continue to protect coast from storms and sea-level rise, and serve at-risk species

The 20-acre property is made up of spartina marshes on tidal waters and maritime forest uplands on the Intracoastal Waterway. With its protection, OSI will donate the property to the USFWS for inclusion in the CRNWR, where it will be a valuable coastal buffer against intensifying storms and rising seas.

Protection of the property builds upon OSI’s 2016 protection of an adjacent 105 acres to the west, also transferred to CRNWR that year. Both properties, which had been at imminent risk of development before their protection, together constitute the entirety of the 125-acre Pappas Island — now conserved within CRWNR for habitat preservation and passive public recreation such as photography, bird watching, kayaking, fishing, and environmental education.

OSI’s protection of the property was supported by funds from the Charleston County Greenbelt as well as a grant subaward from Ducks Unlimited utilizing USFWS North American Wetlands Conservation Act funds.

Once used by the Sewee Native Americans, the island is home to “shell middens” — refuse heaps of oysters, shellfish, and other organic materials whose concentration creates a uniquely calcified soil type and gives rise to unusual plant communities.

“Ducks Unlimited is proud to continue our long-standing partnership with OSI and Cape Romain NWR in the permanent protection of Pappas Island,” said Emily Purcell, Ducks Unlimited Director of Conservation Programs, South Atlantic. “Acquisition of this tract and incorporation into the Refuge not only provides coastal resilience benefits to local communities, but also expands the availability of permanently protected habitat supporting hundreds of thousands of migratory birds that utilize coastal South Carolina and the Atlantic Flyway.”

Adjoining the CRNWR is the Francis Marion National Forest, which stretches almost 260,000 acres and is critical to the state’s long-term longleaf pine restoration efforts. Since 2014, OSI has protected 17,907 acres for addition to the national forest.

Beyond its ecological importance, Pappas Island contains a critical cultural and historical inheritance.

Once used by the Sewee Native Americans, the island is home to “shell middens” — refuse heaps of oysters, shellfish, and other organic materials whose concentration creates a uniquely calcified soil type and gives rise to unusual plant communities.

The land is also within the culturally significant Gullah/Geechee Cultural Heritage Corridor, designated by Congress in 2006 to recognize the important contributions made by Africans and African Americans known as Gullah/Geechee.

With its conservation, the Pappas Island property brings the total of acres conserved by OSI in South Carolina to more than 36,000 since 2014. 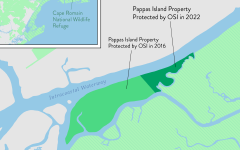