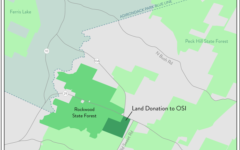 Johnstown, N.Y (February 8, 2022)— The Open Space Institute (OSI) today announced that it has received a land donation of property located in Fulton County in the Southern Adirondack Foothills, adjacent to the 856-acre Rockwood State Forest and other publicly protected lands. Almost completely forested, the property includes existing foot trails. The donation supports OSI’s ongoing efforts to protect land in and around the Adirondacks and expand recreational access for residents and visitors in the region.

The 106-acre property was donated to OSI by James and Helen Hays in memory of their parents, D. Douglas Hays and Helen I. Hays, and James Hays' son, Alexander M. Hays.

The property was originally purchased in the early 1900s by David Alexander Hays when the area was abandoned farmland. David Alexander Hays reforested the land, planting white and scotch pine, and the land has been responsibly managed by the Hays family ever since. Now, after more than a century of careful stewardship, Helen and James Hays, the grandchildren of David Alexander Hays made the decision to permanently protect the land for public enjoyment.

OSI’s president and CEO, Kim Elliman, applauded the family’s long history of careful and loving stewardship of the land and the family’s decision to ensure the property remains undeveloped, “This forested property has been sustainably managed by the Hays family for decades, and the care and attention they have put into the land is part of the matchless beauty of the region. This generous donation provides another step toward protecting the Southern Adirondack Foothills for people, for wildlife, forever.”

“It was the wish of our parents, D. Douglas Hays and Helen I Hays, that the land never be developed and be kept in a natural state, so we donated the land to OSI. It is our hope that the land be used to extend the boundaries of the adjacent state forest for the mutual benefit of these beautiful, combined woodlands and the wild creatures that dwell therein. We dedicate this donation, in loving memory, to our parents and my son, Alexander M. Hays,” said James Hays, who donated the land.

DEC Commissioner Basil Seggos said, “The Hays family are true environmental stewards, and this donation to OSI will help preserve, maintain, and enhance this forested land for future generations. New York is grateful to the Hays family for this generous gift and OSI’s sustained partnership to preserve and protect this treasured parcel with remarkable natural wildlife habitat and trails in the Southern Adirondacks.”

The property has been enrolled in the 480a forest tax law program, which supports and encourages responsible long-term management of woodlands, by the Hays family and will remain in the program under OSI’s management.

OSI anticipates future transfer of the parcel to the New York State Department of Environmental Conservation as an addition to Rockwood State Forest.