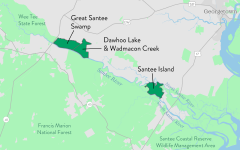 GEORGETOWN COUNTY, SC (Dec. 6, 2021)—The Open Space Institute (OSI) and The Nature Conservancy (TNC) today announced the purchase of three properties along the Santee River in South Carolina, adding key acreage within the second largest river basin on the East Coast. Conservation of the properties also expands the largest contiguous block of protected coastal lands in the state, while safeguarding forests and wetlands that will be essential to providing habitat and storing carbon in the face of climate change.

The properties, together totaling more than 5,700 acres (see map and photos here), are located along the northern bank of the mighty Santee River in Georgetown County, the epicenter of rice production in the early 19th century where land had been converted for agricultural use by enslaved Africans.

With their protection, the lands are now part of a regional patchwork of permanently protected properties called the “Santee River Wilderness Corridor” — one of the greatest and least well-known coastal wildernesses in North America — which spans almost 400,000 acres, and includes state, federal, and land trust conservation easement areas such as the Francis Marion National Forest, Cape Romain National Wildlife Refuge, and Wee Tee State Forest.

The properties contain critical habitat — including a mix of freshwater marsh, tidal forested wetlands, and upland mature pine-hardwoods — to shelter 116 priority wildlife species of conservation concern, while the river itself is home to endangered fish including the Atlantic and short-nosed sturgeon. The region itself is also one of the last possible refuges for the ivory-billed woodpecker, the legendary bird and icon of southeastern floodplain forests.

“Like the ACE Basin of 30 years ago, the Santee River Basin of today is an extraordinary ecological area, largely undeveloped and in need of protection,” says Dale Threatt-Taylor, Executive Director of The Nature Conservancy in South Carolina. “We have the chance to do something really special here that folks will celebrate generations from now. We’re thrilled to see these 5,700 acres moving toward public access and public ownership, and also excited for what this project means to the larger conservation vision for this region that TNC has been working toward since the 1970s. It’s a legacy we can only create together!”

The South Carolina Conservation Bank will provide funding for the eventual acquisitions by the state of all three properties.

“The Santee River is one of the most pristine wildernesses along the entire Eastern Seaboard,” said Raleigh West, Executive Director of the SCCB, which provides funds that allow partners to build the foundation to apply for additional federal and private support. “These projects will help ensure that its ecological integrity remains intact and will expand public access to them for hunting, fishing and outdoor recreation.”

Conservation of the lands was achieved through a substantial bargain sale from its previous owners.

“As timberland investors, we are thrilled to be able to make a return on investment, while also conserving these tracts for future generations,” said Will McKenzie, Managing Partner at Carolina Timberlands Group. “Anytime we can avoid subdivision of large tracts of land, we are helping to preserve South Carolina's natural and cultural history.”

Together, the properties store an estimated 402,000 metric tons of carbon in trees and soil and are expected to sequester an additional 114,000 metric tons of carbon by 2050. Forests, their trees, and soil are critical to storing carbon; and, when managed correctly, forests can also play a critical role in capturing the carbon emissions that are being produced today.

The properties also provide valuable breeding, nesting, nursery, and foraging habitat for priority wildlife species of conservation concern including bats, amphibians, reptiles, fish, crayfish, mussels. Included in this number is a host of waterfowl; neotropical migratory birds such as vireos, warblers, swallow-tailed kites; and colonial waterbirds including wood storks, herons, and egrets. Radar studies confirm that land birds rely heavily upon the forested floodplains of the Santee Delta as stop-over habitat to rest and refuel during annual migration.

Additionally, the properties’ proximity to the Santee Delta WMA, Santee Coastal WMA, and other privately conserved wetlands provides benefits for maintaining habitat connectivity and quality along the Santee River, for the federally endangered short-nosed sturgeon and other sensitive wildlife.

About the Santee River Wilderness Corridor

The Santee River Basin — which drains an area the combined size of Massachusetts, Vermont, and New Hampshire — gathers rainfall and seepage from the alpine forests, balds, and hollows of the Blue Ridge Mountains, carving thousands of rivulets, brooks and streams that rush down the escarpment between Boone, North Carolina, and Table Rock Reservoir in South Carolina.

Many local residents are descendants of former slave communities and continue to use the forest for subsistence fishing and hunting, as well as for foraging medicinal plants.

The Santee River Wilderness Corridor focus area is located on the floodplain of the Santee, which stretches from the Santee Cooper dam to the Atlantic Ocean. The focus area includes 32 percent of the state’s coastal marshes, as well as managed wetlands that support a large portion of the state’s overwintering waterfowl. In addition to the Santee Coastal Reserve and the Cape Romain WMA, the focus area includes significant properties such as Cape Romain National Wildlife Refuge — which encompasses 66,000 acres, of which 29,000 have been federally designated a Class 1 Wilderness — and the 20,000-acre Yawkey Wildlife Preserve.

Protection of the properties secures more land for region that is rich in ecological, Colonial, African American, and Native American history.

Just west of the current route of U.S. 17 runs the Old Georgetown Road, once called the King’s Highway, and known as the Great Catawba Trading Path prior to European and African settlement – an important trade route for Native American tribes traveling between the Carolinas.

During the 1700s and 1800s, the Santee River Delta region relied heavily on African American slave labor to produce the majority of the nation’s rice crop. After the abolishment of slavery, some African Americans stayed on, buying up small acreages of former plantation lands and establishing settlements, churches, and schools of their own. Meanwhile, the remaining tracts of plantation lands under white ownership reverted mostly to timber production and hunting.

As the years passed, nature survived and flourished in this forgotten region, side-by-side with the white families who managed to keep large acreages intact and the African Americans who marshaled a deep knowledge of the woods, swamps, and creeks to supplement their meager incomes from farming and contract labor in this remote landscape.

Today, many residents are descendants of the former slave communities and continue to use the forest for subsistence fishing and hunting, as well as for foraging of medicinal plants.

The Open Space Institute protects scenic, natural, and historic landscapes to provide public enjoyment, conserve habitat and working lands, and sustain communities. Founded in 1974 to protect significant landscapes in New York State, OSI has been a partner in the protection of nearly 2.3 million acres in North America, including more than 61,000 acres in South Carolina, Georgia, and North Carolina. Visit OSI online at openspaceinstitute.org.