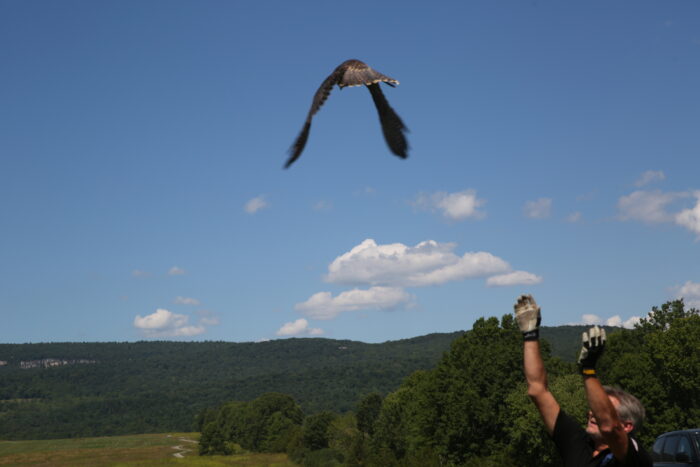 Since this ongoing partnership began in 2020, more than 20 falcons have been re-released into the wild from the trail. The River-to-Ridge Trail was identified as an ideal location because of the trail’s proximity to the Shawangunk Ridge, a prime nesting location since the birds prefer to nest at high altitudes and along cliff faces. The River-to-Ridge Trail’s expansive site lines also allow greater monitoring as the birds take flight and re-enter the wild.

“Peregrine falcons are magical creatures and OSI is proud that the River-to-Ridge Trail is part of giving these falcons the best chance at re-introduction into the wild,” said Kim Elliman, OSI’s president and CEO, who is an avid birder himself. “From welcoming more than 200,000 trail users to serving as the launching site for rehabilitated birds, the River-to-Ridge Trail underscores how protected land provides many services for people and wildlife.”

Having worked on the nest-site management and peregrine falcon rehabilitation and release program in the Hudson Valley, New York City, and Long Island for the past 35 years, Nadareski has extensive experience rescuing and nursing peregrine falcons back to health before setting the birds free.

“New Paltz has a long history of peregrine activity and was a location instrumental in the early recovery of the species,” said Nadareski, a longtime bird rehabilitator. “In my line of work, I have found that public relations and education has been a key component to the success of the peregrine rehabilitation and release program. It continues to be as much of a joy and a privilege to work with falcons, today, as it was when I first became involved.”

In addition to performing peregrine falcon rehabilitation and release as part of his professional responsibilities at the New York City Department of Environmental Protection (NYCDEP), Nadareski volunteers his time and falcon expertise with the New York State Department of Environmental Conservation and also leverages the releases as educational opportunities for others.

With three-foot wingspans, peregrine falcons are known as the fastest bird for the ability to reach speeds over 200 mph while diving for prey. After a significant decline between 1950-1970, peregrine falcons were placed on New York State's endangered species list and removed from the list in 1999. Since then populations of the bird have continued to see growth.

Peregrine falcon populations continue to expand, and have also adapted to urban landscapes, like New York City, where the concrete, steel, and glass bridges and skyscrapers resemble natural mountain cliffs and pose risk to the falcon population.

The River-to-Ridge Trail provides access to a shared, public space that is open to diverse user groups. Created in partnership with Mohonk Preserve, and with funding from the Butler Conservation Fund, the River-to-Ridge Trail traverses 400 acres of OSI preserved and managed land and connects people to the Shawangunk Ridge.

Over the past 40 years, OSI has protected nearly 33,000 acres on and along the Ridge and has now its sights on further connecting people to land it has protected and improved — from restoring over 12 miles of Victorian carriage roads, to the creation of a new Visitor Center at Minnewaska State Park Preserve. In downtown New Paltz and on the River-to-Ridge Trail, OSI’s commitment is already having an impact.