How helping cranberry farmers return their farms to their natural state is protecting water quality and curbing flooding in the New Jersey Pinelands.

PHILADELPHIA, PA (June 16, 2021)—Spanning most of southern New Jersey, the Pinelands region is renowned for its dense forests, placid rivers, and an impressive collection of rare plants and animals. Also sharing the landscape is a collection of approximately 25 cranberry farms spanning some 3,000 acres — several of which are family-run and struggling to stay afloat against better-capitalized competitors growing modern, hardier cranberry varieties.

With some of these farms opting to get out of the cranberry business, the Open Space Institute (OSI) through its Delaware River Watershed Initiative is partnering with current and former farmers to offer conservation of cranberry boglands as an alternative to development. Once the land is protected, conservationists with OSI’s support begin working to “re-wild” the bogs. Through a carefully balanced process, the conservationists manage the land’s transition from generations-old artificial flooding practices associated with the cranberry harvest, to help protect the Pinelands’ long-term hydrology and habitat.

Craig Mehler is one early partner and pioneer in this effort. A few years prior, Mehler, facing the realization of market forces, decided to shut down the majority of his family’s cranberry business. But in the end, the closure of most of the farming operations would signify a new opportunity for his land.

Today, Mehler is working with the New Jersey Conservation Foundation (NJCF), with the support of OSI, to re-wild a significant portion of his 230-acre property, located in the headwaters of the Rancocas Creek, a key tributary of the Delaware River. He is now determined to help protect the land for both the creek and the Kirkwood-Cohansey aquifer — a source of clean fresh water under the New Jersey Pinelands that provides drinking water for millions of people.

Cranberry farmers faced with difficult decisions are realizing that conservation is nearly as financially worthwhile as selling land to developers, but much more fulfilling; and that such a sale can allow for a comfortable retirement.

“I feel like after all these years, I need to make sure this land will continue to produce clean water and support this region’s wildlife,” Mehler said.

Mehler is not alone; other cranberry farmers faced with difficult decisions are realizing that conservation is nearly as financially worthwhile as selling land to developers, but much more fulfilling; and that such a sale can allow for a comfortable retirement.

Over the past four years, OSI has approved four grants totaling $350,000 to conserve more than 1,100 acres of land in the Pinelands, including the 442-acre Thompson Wright property and 202-acre Bucks Cove Run property. Two other OSI-supported projects involving 500 acres of cranberry bogs nearby are also expected to be conserved — linking together more than 35,000 acres of conserved land, including the Wharton State Forest, the largest single tract of land in the New Jersey state park system.

“By bringing funding and attention to the critical link between land protection and clean water, OSI is helping the land trust community seize the opportunity to protect several signature properties at a time of transition in the cranberry business,” said Bill Rawlyk, OSI’s Mid-Atlantic Field Coordinator.

Protecting the land is just the first step in the re-wilding process. The nearby Thompson Wright property, protected in 2018 with a $124,500 grant from OSI, is a case in point. The cranberry bog, which had been owned by the same family since the Civil War, encompasses 5.5 miles of streams, including the pristine Burrs Mill Brook — a tributary of the Rancocas Creek, which flows into the Delaware River. But the bog had been out of production since 2004, and without the regulation of water into the bogs — engineered seasonally by the farmer — the hydrology and unique habitat of the bogs would be lost.

With a grant from the Delaware Conservation Fund, NJCF is now studying how best to restore the land to maintain its hydrology and keep the wetlands open and healthy. “Previously, it was set up so the farmer could control water in the bog — they would dry it out significantly, by diverting streamflow around the cranberry fields during the growing season, and then flood it deep during harvest and in winter,” said Dr. Emile D. DeVito, NJCF Manager of Science & Stewardship. “We want to create a passive system that can fluctuate naturally and self-regulate without requiring constant intervention.”

“Protection and restoration really go hand-in-hand in this landscape,” said Rachel Dawson, Program Director for the Delaware River for the National Fish and Wildlife Foundation, which administers the Delaware Watershed Conservation Fund. “We were pleased to help build upon OSI’s support to protect the land by helping NJCF figure out how best to manage and restore it.”

Another significant benefit to re-wilding the bogs is controlling floods, which are expected to worsen under a changing climate. A prime example occurred 12 years ago when a 14-inch summer rainstorm inundated the Franklin Parker Nature Preserve, a 9,400-acre property that NJCF had purchased in 2003 with an OSI loan. Much of the land was previously in cranberry and blueberry agriculture, and NJCF was able to open the gates controlling water flow to the former cranberry bogs, allowing floodwaters from the West Branch of the Wading River to flow into the Parker Preserve, and then downstream into Wharton State Forest — protecting the roads and bridges near the village of Chatsworth and several downstream cranberry operations from more severe flooding and damage.

“The bogs literally saved us,” said DeVito. “It was about as graphic a demonstration as exists of the multiple benefits these landscapes have once they are protected and managed well.”

For his part, Craig Mehler is looking to the future and excited to be a pioneer of environmental protection among the Pinelands’ cranberry growers.

“People forget how important the Kirkwood Cohansey aquifer is, and headwaters of the Rancocas,” he said. “Nobody wants clean water more than cranberry growers, and it is very gratifying, personally, to be doing my part and help the industry get there.” 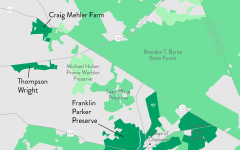 South Carolina's majestic Black River is one of the great natural resources on the East Coast. And now, OSI's acquisition of more than 300 riverfront acres is on track to become the first new state park in 15 years.