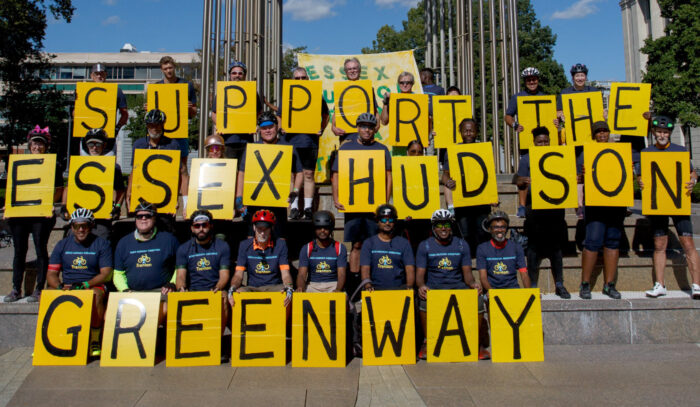 This Story protects
Land for Recreation
Land for Healthy Communities

It was an announcement that some in the room had been waiting more than a decade to hear.

A project that will manifestly change the way millions of people in northern New Jersey live, recreate, commute, and experience the outdoors was finally within reach.

But first, New Jersey would have to commit to purchase nine miles of former rail line, the state’s single largest conservation investment in history, to create the linear park greenway in the most densely populated and developed region in the nation.

As he stepped to the lectern on a rainy November morning in a local library, it was clear Governor Phil Murphy knew full well the magnitude of his announcement.

“When we look back 30–40 years from now, this is a top-five accomplishment,” he said with enthusiasm. “This is a big deal that folks will benefit from for a long, long time … but the first part of this journey, securing the land, is about to be completed.”

Governor Murphy received a standing ovation as he committed $65 million to purchase the property, providing the basis for a multiuse linear park that will connect eight communities.

For years, attempts to create the greenway were stalled as local leaders and advocates were unable to reach agreement with the Norfolk Southern Railway Corporation for purchase of the 135-acre property. Now, three years after the Open Space Institute entered the effort, the project is one critical step closer to becoming a reality.

OSI first secured the elusive purchase agreement with the rail company and then turned its attention to obtaining public financing to advance the deal.

With local partners New Jersey Bike & Walk Coalition and the September 11th National Memorial Trail Alliance, OSI launched a public advocacy campaign to build community support for the project and leverage local enthusiasm into a commitment from the State of New Jersey to fund the acquisition.

The state’s commitment underscores the merits of public-private partnerships and strategic land protection. To bring the project to life, OSI energized the local philanthropic community, including the Thomas L. Kempner Jr. Foundation, Helen & William Mazer Foundation, and Partners for Health Foundation, which saw the unparalleled potentials of the greenway and provided nearly $4 million in private support.

State Senator M. Teresa Ruiz, who spoke at the governor’s announcement ceremony, anticipated long-term and tangible benefits for her Newark community, particularly children. “Today I came to share a sigh of relief. … When we think about the announcement the governor is making today, he’s taking all these pieces to uplift environmental justice in the most critically needed spaces so that our children can run and breathe clean air.”

OSI President and CEO Kim Elliman echoes the senator’s thoughts, emphasizing how dramatically the project will expand access to parks and nature — especially in the aftermath of the pandemic.

“The need to provide equitable access to the outdoors has never been more greatly understood and motivating,” says Elliman. “We are forever changing the way people connect with nature and each other — and in doing so, building stronger, healthier neighborhoods and communities throughout northern New Jersey. And OSI could not be prouder.”

Funding Forests for Our Future (2022)