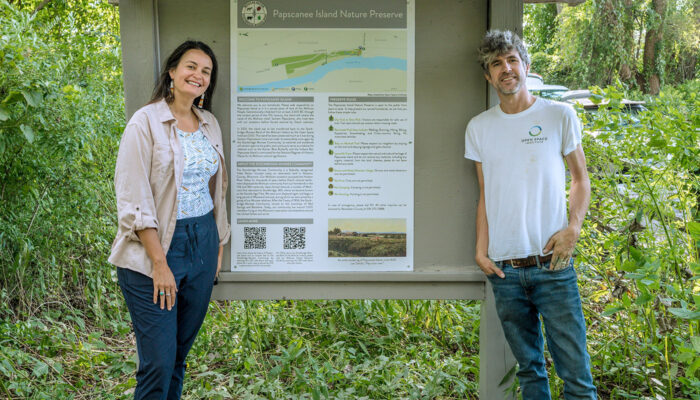 The Greatest Gift: The Return of Papscanee Island

For thousands of years, the Mohican people inhabited a swath of land along what is now known as the Hudson River. Today, almost four centuries after their ancestors’ painful removal from the region, this hallowed place has been returned to the Stockbridge-Munsee Mohican Community following a land donation by OSI.

It was a deeply satisfying conclusion for OSI, which acquired the Papscanee property outside Albany a quarter-century ago and, with local partners, tended the land as a nature preserve. “Twenty-five years ago, when Papscanee was threatened by imminent development as an oil refinery, OSI stepped in to protect this important cultural resource,” said Kim Elliman, OSI president and CEO.

For centuries, the land was stewarded by a people who called themselves the Muhheconneok, meaning “People of the Waters That Are Never Still.” In time, the island came to be known as “Papsickene Island” after a revered sachem, or chief, who presided over the tribe when the Dutch first encountered them. In 1637, the Dutch presented a deed to the heirs of Sachem Papsickene for control of the land, forcing their removal from the land they had inhabited for generations.

“Because of our traditional views of shared landownership, our ancestors thought they were participating in a gift exchange and being hospitable to neighbors asking for use of Papscanee Island,” said Bonney Hartley, historic preservation manager of the Stockbridge-Munsee Mohican Community. “They thought they could always return to the land.

“Our land is intrinsic to who we are — it’s our identity. The greatest gift is to have our land back,” said Bonney Hartley, historic preservation manager of the Stockbridge-Munsee Mohican Community.

Leaving Papscanee, the Mohican people began a long and painful odyssey of forced displacement, moving first to New England, then to western New York and the Midwest. Finally, by the mid-1800s, the tribe was granted permanent property in Wisconsin.

Meanwhile, Papscanee was settled and farmed by Dutch tenants and remained in continuous cultivation until the 1990s, when a local port authority sought to purchase the land. Seeing a need, OSI stepped in to protect the land, in partnership with Rensselaer County.

Today, at Papscanee Island Nature Preserve, clear water laps softly against rounded pebbles, and ripples glint and sparkle in the dappled sunlight. This beautiful place is not only the northernmost wetland for the Hudson River estuary, it also provides habitat for many federally endangered species and species critically imperiled in New York State.

The land is now officially in the hands of the Stockbridge-Munsee Community. OSI has worked with community members to install new signage that gives a brief overview of the land’s long history and informs visitors about its role in Mohican history.

“This place is a cultural touchstone that we can continue to come back to, and directly communicate with and draw strength from our ancestors,” Hartley said. “Our land is intrinsic to who we are — it’s our identity. The greatest gift is to have our land back.”

Learn more about the history of Papscanee Island and the Mohican Nation’s forced removal from the region in OSI’s Long Journey Home Story Map.