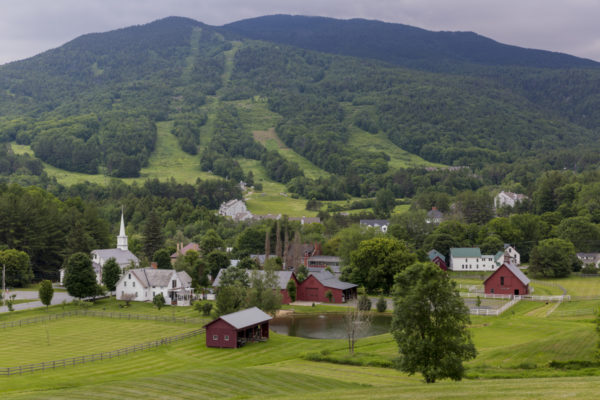 By strategically protecting land that benefits communities, OSI is helping to improve quality of life for local residents while safeguarding resources for future generations.

OSI’s support for Community Forests, a land ownership model that enables town residents to collectively manage local lands, provides a perfect example. In New England, OSI helped to create one Community Forest at the celebrated Vermont Catamount Outdoor Family Center, visited by 20,000 people annually; and another in Bethel, Maine, less than one mile from the village center and linking a block of 3,500 contiguous protected acres to the town center.

A recipient of OSI's McHenry Awards is working to turn around city-owned vacant lots in Newburgh, New York.

Even in bustling Manhattan, OSI’s support for local communities is making a difference. At Harlem’s Riverbank State Park, OSI and its partners celebrated the success of their $2.8 million public-private capital campaign to revitalize the park’s Performance Center with an event in the new hall featuring captivating dancers and musicians.

On the national stage, OSI celebrated as the Land & Water Conservation Fund received permanent reauthorization in March. Working with partners, OSI continues to raise its voice for permanent funding for America’s most important conservation and recreation program, which has helped to enhance many parks across the nation, including the Everglades Headwaters National Wildlife Refuge, Cherry Valley National Wildlife Refuge, and the George Washington and Jefferson National Forests; three conservation areas also added to by OSI’s Triple Diamond Ranch, Cherry Valley, and Grace Furnace projects, respectively.

Across New York City and other communities, OSI’s Citizen Action program continues to make a difference boosting grassroots organizations. Among those mentored by OSI this year include iDig2Learn, which helps youngsters in New York City engage with the outdoors and promote fresh food for the local community; and Millbrook Gardens, which aims to create green space within an inner-city housing development and turn it into a fully accessible community garden.

Finally, OSI’s Barnabas McHenry Awards program continued to honor exceptional young leaders working to protect and enhance the Hudson River Valley, including one young recipient who is working with the Hudson Valley Initiative to turn city-owned vacant lots in Newburgh into temporary or permanent neighborhood amenities. She was among OSI’s five recipients of the 2019 McHenry Award, which seeks either undergraduate or graduate students who work on topics ranging from environmental conservation to arts to tourism.

Donate to protect the lands you love.

Please consider a year-end gift to help continue our work protecting the land you love, and improving your access to it.

OSI, with support from the William Penn Foundation, has an expansive initiative to support the long-tern health of the Delaware River.