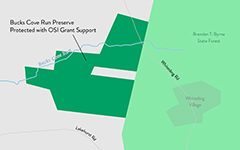 PEMBERTON, NJ (July 23, 2019) — With support from the Open Space Institute, a long-abandoned blueberry farm is now permanently preserved as open space. The property will expand recreational opportunities in central New Jersey while protecting drinking water within the Delaware River.

OSI protected this property through its Delaware River Watershed Protection Fund, capitalized by the William Penn Foundation. The property contains extensive wetlands and protected forests that will shelter and maintain the water quality of Bucks Cove Run, which flows into the Rancocas Creek. The Rancocas provides clean drinking water to millions of users in downstream communities which draw water from the Delaware River, most notably Philadelphia, which has a major water intake just downstream of the mouth of the Rancocas.

“This land is an inspiring model for protecting the forested source water of the greater Delaware River, and for safeguarding the drinking water of millions of local residents along the river,” said Peter Howell, Executive Vice President of OSI. “We applaud the conservation ethos of the New Jersey Conservation Foundation and Rancocas Conservancy to bring this effort to fruition.”

Since its creation in 2014, OSI’s Delaware River Watershed Protection Fund has supported more than 50 land protection projects that are slated to conserve over 22,200 acres of lands that filter water within the Delaware Basin.

This newest-conserved property is adjacent to the 33,600-acre Brendan T. Byrne State Forest. In the future, marked trails will provide ample opportunities for hiking, wildlife viewing, birding, photography, and botanizing.

In addition to OSI’s support, major financial assistance was provided by the Pinelands Commission and the New Jersey Green Acres Program. Additional funding was made possible by an award from New Jersey Conservation Foundation’s Franklin Parker Conservation Excellence Grant and from the Pinelands Preservation Alliance, through grant money it received from the William Penn Foundation.

Without the support of the many volunteers from the Pinelands Preservation Alliance, who turned out on several weekends, the clean-up of this property would not have been possible. In addition to picking up bottles, cans and other debris, the undertaking required the removal of three power boats and the burned-out hulk of a house trailer. In addition, volunteers have begun restoration of the property by planting Atlantic White Cedars along stream and wetland corridors.