Conservation of the 929-acre parcel secures essential wildlife habitat and will create additional public land within one of the state’s fastest-growing regions. All three conservation projects were completed in less than a year and total more than 5,000 acres in Jasper County. OSI intends to transfer the property to the South Carolina Department of Natural Resources (SCDNR) as funding comes available.

The property, which features mature productive wetlands, is adjacent to and builds upon the OSI’s historic acquisitions of the 3,800-acre “Slater” and 336-acre “Slater Duck Ponds” parcels. The newly protected 929-acre property further expands gopher tortoise habitat established by OSI’s conservation of the original Slater property, which is home to one of the largest colonies of gopher tortoises in the eastern United States. The land also contains habitat conducive for the potential reintroduction of the federally endangered Red-Cockaded Woodpecker.

The three OSI-protected properties are within a 30-minute drive from Savannah, Hilton Head, and Beaufort, and are located in one of America’s most biologically diverse yet fastest-growing regions. The conservation of the more than 5,000 acres offers opportunities for hunting, fishing, birding, hiking, and cycling in an area where the nearest similar public preserve is almost an hour away.

'The Slater acquisitions prove that despite mounting development pressure, large-scale conservation for nature and the public is both achievable and critically important.' -  Nate Berry, OSI’s Southeast Office Director

“The Slater acquisitions prove that despite mounting development pressure, large-scale conservation for nature and the public is both achievable and critically important,” said Nate Berry, OSI’s Southeast Office Director. Berry continues, “Each of the three Slater tracts are amazing on their own. Together they are remarkable. OSI is proud to secure these beautiful and abundant properties and looks forward to working with our partners SCDNR and Jasper County on future successes.”

In June 2021, OSI’s $16 million acquisition price for the first Slater tract ranked as one of the largest conservation investments in state history. With support from the Land and Water Conservation Fund (LWCF), OSI will transfer that property, along with the second and third properties in the assemblage, to SCDNR, which will then develop the infrastructure necessary for the public to enjoy the property while preserving its biological integrity.

“At over 5,000 acres and $20 million, the Slater project represents a new and transformative era of investment in Jasper County,” stated Jasper County Administrator Andrew Fulghum. “This outstanding conservation victory was made possible by OSI’s visionary leadership, and we are grateful. What’s equally exciting is that Slater builds on the County’s 2021 Conservation Finance Feasibility Study and sets the stage for a larger, collaborative conservation investment effort for our region.”

With their protection, the three Slater properties serve as a bridge linking the renowned ACE Basin with the Southern Lowcountry Conservation Focus Area. This focus area consists of the watersheds of three beautiful blackwater rivers — the Coosawhatchie, Pocotaligo, and Tulifinny — which together form the headwaters of the Broad River estuary. All told, this region encompasses more than a tenth of South Carolina’s land area and constitutes one of the largest undeveloped, most ecologically intact regions on the East Coast.

Additionally, the properties also provide extensive opportunities for outdoor recreation near fast-growing areas and underserved rural communities. Local residents, many of whom are Black and Hispanic, depend on public lands and river access points for recreation and subsistence.

OSI’s Southeast office, established in Charleston eight years ago, has been a partner in the protection of more than 50,000 acres in South Carolina, the vast majority of which will be open to the public. 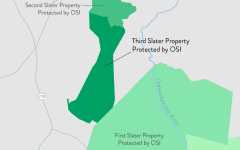