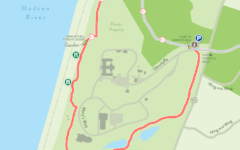 GARRISON, NY (Oct. 19, 2022)—The Open Space Institute (OSI), in partnership with the New York State Office of Parks, Recreation and Historic Preservation (OPRHP), the New York-New Jersey Trail Conference (NYNJTC), the Lostand Foundation, the Garrison Institute, Hudson Highlands Land Trust, and the Town of Philipstown, announced the opening of the newly improved Glenclyffe Loop Trail in Putnam County. Over the past year, OSI-led improvement projects along the Glenclyffe Loop Trail have made the area more welcoming and accessible to visitors by facilitating better access to the Glenclyffe, Arden Point, and Castle Rock areas of Hudson Highlands State Park and enhancing connection to the trail from the Metro North Garrison Train Station.

Improvements to the Glenclyffe Loop Trail included construction of a new, 12-car parking area and trailhead, creation of an improved accessible entry path, trail reroutes and improvements, installation of a trailhead kiosk with visitor information, and improved wayfinding and interpretive signage. The upgrades will provide a more welcoming, user-friendly, and enjoyable experience for visitors along the trail.

“OSI is eager to make parks and protected land more welcoming and easily accessible to people, especially here in the Hudson Highlands where we have a long history of land conservation,” said Kim Elliman, OSI’s president and CEO. “We are especially delighted that the newly improved loop trail will serve both local residents and those arriving via train.”

The Glenclyffe Loop Trail features two miles of footpaths meandering through more than 93 acres of scenic woodlands. Along the trail visitors can enjoy dramatic views of the Hudson River and experience the rich history of the site, which includes the historic path of Benedict Arnold’s escape route after his attempted surrender of West Point. To foster visitor appreciation of this history, a new interpretive panel tells the story of this historic event, developed in partnership with the Putnam History Museum.

“Two decades ago, when we cut the ribbon for Marcia Favrot’s trail, the Open Space Institute created a wonderful community asset. Today, Marcia’s Mile a beloved local treasure, has been lovingly restored,” said John Adams, Co-Chair of the OSI Board. “We are grateful for the support of the family and our public partners for their continued support of this terrific Garrison project.”

“New York State Parks is proud to have provided staff and expertise to work on these trails in Garrison in collaboration with OSI and other partners to make it a special woodland place,” said OPRHP Taconic Regional Director Linda Cooper. “These trails have a legacy of community, cultural history and environmental protection associated with them, and are all walkable from the local rail station.”

“The work that has gone into this new imagining of the trail is truly remarkable. Trails like this help to cultivate that childlike spark in all of us. I love all the little moments of wonder and delight and that my mom’s little fox blazes continue to point the way,” said Amie Anderson, daughter of Marcia Favrot. “My mom was devoted to protecting green spaces, in the Hudson Valley and beyond, and making them accessible. Everyone deserves the chance to develop a personal relationship with Mother Nature, to nourish their spirit amongst ponds and meadows, and to experience both the grandiosity and the simple quiet calm of a walk in the woods. I hope everyone who visits the trail comes away from it feeling joyful and rejuvenated.”

“The trails in Glenclyffe provide a unique combination of river views, historical elements, and beautiful landscapes that is now complimented by the trail system thanks to the work of our volunteers and OSI. The Trail Conference is incredibly grateful to have been a part of the team to construct a more sustainable and enjoyable trail experience for the many visitors and local communities that utilize the area. We look forward to continuing our work with OSI on similar projects to make improvements for all users who appreciate the trails throughout the region,” said Melissa Cascini, the New York Program Coordinator at the New York-New Jersey Trail Conference.

The Hudson Highlands Land Trust are also long-time supporters of improving trail access in the region, including areas within the newly created Glenclyffe Loop Trail network.

The Glenclyffe Loop Trail and Marcia’s Mile cross Hudson Highlands State Park, as well as several privately owned properties. Visitors are required to stay on the designated trails and follow all posted signage.

Trail and access improvements to the Glenclyffe Loop Trail and new trailhead were supported with funding from the New York State Conservation Partnership Program (NYSCPP) and New York’s Environmental Protection Fund. The NYSCPP is administered by the Land Trust Alliance, in coordination with the state Department of Environmental Conservation. Additional support was provided by an anonymous donor.

In 2001, OSI acquired the 93-acre property to protect the land from a controversial proposal that would have resulted in intensive residential and commercial development. Over time, OSI transferred portions of the property to the Town of Philipstown, the Lostand Foundation, and the Garrison Institute, while maintaining conservation easements on the land for permanent protection. In 2019, OSI transferred a northern parcel of the land to New York State Parks as an addition to Hudson Highlands State Park.

The Glenclyffe area is the ancestral home of the Wappinger, a Munsee-speaking Indigenous nation that were the early inhabitants of the region. Dispossessed of their land by European settlers and suffering devastating losses fighting in support of the Patriots during the American Revolution, the Wappinger joined the Mohican Nation in their westward journey to become the Stockbridge-Munsee Community.

Glenclyffe is famously known as the location of Benedict Arnold’s Flight Path, where he fled after his traitorous plot to surrender West Point to the British during the Revolutionary War was discovered. A mansion was built in the mid-1800s and the property eventually became part of New York State Governor Hamilton Fish’s estate. In 1928, the Capuchin Franciscan Province of St. Joseph Order of New York purchased the estate and built a friary on the property. The building is now owned by the Garrison Institute, a nonprofit organization that hosts retreats for positive social and environmental change.

The Open Space Institute protects scenic, natural, and historic landscapes to provide public enjoyment, conserve habitat and working lands and sustain communities. Founded in 1974, initially, to protect significant landscapes in New York State, today, the Open Space Institute has been a partner in the protection of more than 2.3 million acres in the eastern US and Canada to promote clean air and water, combat climate change, improve access to recreation, strengthen communities, and provide for wildlife habitat.

Building on this conservation success, the Open Space Institute also works to make these and other protected lands more welcoming and accessible to the public by creating and improving trails, including a more than five-year partnership with the Unites States Military Academy cadets to build new pedestrian trail bridges at Fahnestock and Harriman state