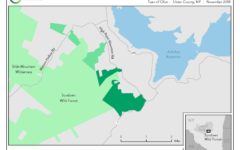 OLIVE, NY (Nov. 21, 2019) — The Open Space Institute (OSI) today announced the acquisition of two properties adjacent to the Catskill Park’s Sundown Wild Forest. Permanent protection of the properties, previously owned by the Golden family and located within the Ashokan Reservoir watershed, will help secure long-term access to clean water for millions of New Yorkers for generations to come.

Located in the Town of Olive, Ulster County, the properties total 871 acres and were purchased by OSI from the Golden family, who have owned the parcels since William T. Golden began acquiring land in the Catskills more than 50 years ago.

Additionally, the parcels add to the system of contiguous conserved lands in the region and intact, protected forests that provide a key function in storing and absorbing carbon. A greater amount of carbon is retained in the soil and trees when the land is largely undisturbed.

The newly protected properties have the potential to serve as an eastern access point to the more than 3,000-foot Ashokan High Point hiking trail. Once the “Golden” properties are transferred from OSI to the New York State Department of Environmental Conservation (DEC) as an addition to the Sundown Wild Forest of the Catskill Park, it will be one of the largest additions to the park in recent years.

“The Open Space Institute is proud to continue its work protecting the watershed in this region of the Catskill Park and leveraging forested land as a critical carbon-capturing tool in the prevention of climate change. Strategic land conservation goes hand-in-hand with providing healthy communities safe, reliable drinking water and places to play,” said Kim Elliman, president and CEO of OSI. “And by protecting land in the Ashokan Reservoir watershed, we are securing an incredibly important water source for millions of New Yorkers.”

New York State Department of Environmental Conservation (DEC) Commissioner Basil Seggos said, “The Golden family has been a wonderful steward of this expansive property on the shoulders of Ashokan High Point in the heart of the Catskill Park. DEC appreciates the family’s continued commitment to ensuring this land is conserved for future generations by working with the Open Space Institute for its eventual addition to the Catskill Forest Preserve. Encompassing more than 870 acres, this is one of the largest Catskill acquisitions in recent memory, and in combination with the 260-acre Adams Property and the 215-acre Trippel property, OSI has protected more than 1,340 acres in the Ashokan watershed for addition to the Catskill Forest Preserve in just the last few years.”

The OSI-conserved properties consist of forested land which provide commanding views of the Shawangunk Ridge, Ashokan High Point, Little High Point, and the Ashokan Reservoir. In addition, the land includes prime habitat for wildlife, including nesting sites for birds of prey.

The acquisitions will expand the boundary of the Sundown Wild Forest, opening up additional wild areas to better welcome and disperse outdoors enthusiasts visiting from near and far to hike Ashokan High Point and other local peaks.

More than 90 percent of New York City’s water supply comes from the Catskill and Delaware watershed, located more than 100 miles north of the city. Water is naturally filtered and cleaned by the land surrounding the Ashokan Reservoir before collecting in this basin, which has the capacity to hold 123 billion gallons.

OSI’s conservation of the Golden properties will advance the efforts made by New York City Department of Environmental Protection (DEP) to protect this critical water source.

OSI’s acquisition of the properties builds on the organization’s history protecting land in partnership with the conservation-minded Golden family. In 2014, OSI secured the Hudson Highlands' largest-ever conservation easement on Black Rock Forest, originally protected by William T. Golden. OSI then donated the Black Rock easement to the State of New York, guaranteeing public access to nearly 60 miles of hiking trails.

In 2017, OSI protected 214 acres of forested land on the north side of South Mountain and then in 2019 protected an additional 261-acre property along the east side of South Mountain, including a portion of the mountain’s summit. OSI also funded the engineering and feasibility study for the Ashokan Rail Trail, an 11.5-mile long new multi-use trail which was built on the north side of the Ashokan Reservoir by Ulster County and opened in Fall of 2019.