CHARLESTON, SC (Jan. 13, 2021)—The Open Space Institute (OSI) today announced the acquisition of a key property adjacent to the Waccamaw National Wildlife Refuge (WNWR). The acquisition will be instrumental in promoting greater public access to the historic Hasty Point Plantation and expanding regional recreational opportunities within the greater WNWR.

“The protection of both Hasty Point Plantation and the Triangle Tract sets the stage for improved recreational opportunities for the people of Plantersville Community, Georgetown County, and the entire region, as well as the opportunity to inform visitors about the history of the former working plantation,” says Maria Whitehead, OSI Senior Project Manager. “OSI thanks our partners at the U.S. Fish and Wildlife Service, as well as the Schofield family for helping create this conservation success.”

“The Triangle Tract is a key parcel that will enable the Refuge to open Hasty Point up to the public,” said Craig Sasser, Manager of Waccamaw National Wildlife Refuge. “The U.S. Fish and Wildlife Service has embarked on a comprehensive, community-based planning initiative that will shape the future management of Hasty Point, and the Triangle Tract is a strategic addition for improving access and expanding recreational opportunities such as youth hunts."

According to Bob Schofield, “Selling Hasty Point Plantation to the Waccamaw Refuge and the Triangle Tract to OSI was a relatively easy decision as we wanted the family land to become a place for future generations to enjoy, appreciate, and learn from. We hope that the properties will be a tremendous asset for the Plantersville Community while also providing habitat for the many threatened and rare species that call it home.”

To ensure a conservation, cultural, and public-access legacy, the landowners, the Schofield family, sold Hasty Point to the US Fish and Wildlife Service (USFWS) for inclusion in the Waccamaw National Wildlife Refuge at a significant discount in May 2020. OSI served as USFWS’s partner and collaborator to secure needed funds for the purchase.

The Schofield family was also instrumental in conserving the Triangle Tract, by first donating a conservation easement on the property to Pee Dee Land Trust in 2008; and later contributing to OSI’s purchase again by selling the land at a significant discount. OSI will serve as owner and steward of the land with an anticipated outsale to Waccamaw Refuge within three years.

With the acquisition, the two properties, which total 1,010 acres, will be managed and restored to provide habitat for a host of rare and threatened species, including Swallow-tailed Kites, Bobwhite Quail, Wild Turkey, Red-cockaded Woodpeckers, wintering waterfowl, Wood Storks, and songbirds — all of which thrive on the land’s native longleaf pine forest, intact ricefield impoundments, and freshwater forested wetlands.

After a long and complicated progression of private landowners that tell the complex story of the South, the two properties are now permanently protected.

Located on a high bluff at the confluence of the Pee Dee River and Thoroughfare Creek, and within the scenic viewshed of a state-designated scenic road and river, Hasty Point Plantation is teeming with history. The property is storied to have been a trading site for nearby Native American settlements and home to two brothers who served under Revolutionary War hero Francis Marion. The plantation is also one of 25 rice plantations in Georgetown County’s Historic Plantersville District, which were the cornerstone of the Lowcountry’s tragic slave-based economy for 150 years.

With their conservation, the two properties will continue to remain much like they are today and were hundreds of years ago. After a long and complicated progression of private landowners that tell the complex story of the South, the Schofield family’s generosity will ensure a new legacy of public access.

The Schofield family’s commitment to preserving and restoring the natural communities and cultural history of the family land is evident in details from the flowering native plants under a longleaf pine overstory to the beautifully restored rice barn on the banks of the river.

Mandala Research and Coastal Carolina University are leading the scoping and planning for the future of Hasty Point, by conducting interviews with local stakeholders to gain a wide variety of perspectives on community needs. Lead consultant Laura Mandala is familiar with the importance of incorporating the history and culture into the plan, and is interested in speaking with individuals who want to contribute their knowledge and perspective on how Hasty Point can fulfill its potential for contributing to the community, the region, and beyond.

Founded in 1974, OSI has grown to become a partner in the protection of nearly 2.3 million acres along the eastern seaboard from Quebec to Florida — including more than 100,000 acres in the Southeastern U.S. 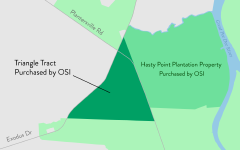