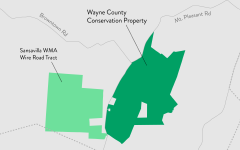 OSI, along with its partners The Nature Conservancy and the Conservation Fund, have contributed nearly a third of the total 100,000 acres targeted for conservation by the GTCI, through the protection of four properties in Georgia.

“The Open Space Institute is proud to have protected this amazing property for Georgia’s state reptile, the gopher tortoise, and the incredible array of other species that call this land home,” said Maria Whitehead, Senior Project Director at OSI. “I thank Southern Power for their incredible generosity in selling this property at a significantly discounted price to make the permanent protection of the land a reality.”

“Southern Power is proud to engage in environmental stewardship and conservation projects that protect and enhance the environment, support our local communities, and increase environmental awareness,” said Southern Power Chairman Mark Lantrip. “This property will help protect wildlife in the areas in which we serve and operate, both today and in the years to come.”

Whitehead also noted that in addition to Southern Power, the conservation project was also made possible through a significant gift by the Knobloch Family Foundation.

In addition to gopher tortoises (Gopherus polyphemus), two other high priority species have been identified on the Wayne County Conservation property. These include the federally threatened eastern indigo snake (Drymarchon couperi), and the federally endangered hairy rattleweed (Baptisia arachnifera), as well as natural stands of longleaf pine forest with intact groundcover.

Gopher tortoises are considered a keystone species because they dig burrows that provide shelter for approximately 350 other species, including eastern indigos. Endemic to longleaf pine ecosystems and named for the cobweb-like hairs that cover its stems, hairy rattleweed is a critically imperiled species that has shown significant population declines over the last 30 years and is known to exist only in two Georgia counties.

“Congratulations to Southern Power and the Open Space Institute for conserving one of the most important tracts remaining for the federally endangered hairy rattleweed,” said Jason Lee of the Georgia Department of Natural Resources. “The hairy rattleweed is plant endemic to and found only in Brantley and Wayne Counties, Georgia, and this will become one of three conserved populations. In addition, there is a viable population of the gopher tortoise, Georgia’s imperiled state reptile, on the property. The permanent protection of the site will contribute significantly to the recovery goals for both species.”

In the coming years, OSI plans to sell the property to Georgia DNR as a strategic addition to the adjacent, OSI-protected property, known as “Sansavilla WMA Wire Road Tract.”

Founded in 1974, OSI has grown to become a partner in the protection of nearly 2.2 million along the eastern seaboard from Quebec to Florida — including over 100,000 acres in the Southeastern U.S.