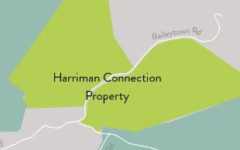 TUXEDO, NY (May 21, 2018)— Building on a 20-year legacy in the Hudson Highlands, the Open Space Institute (OSI) has announced the conservation of land that will expand Harriman State Park and allow for greater public transportation access to the park.  The newly acquired property is located less than a mile from the Harriman Metro-North train station.

The 395-acre “Harriman Connection” property was purchased by OSI for $3,285,000 from a trust of the Northrop-Friedman families. Once conveyed to the state, the addition will offer hikers, runners and cyclists a new, western entrance point to Harriman State Park. Access to the Long Path, a celebrated long-distance hiking trail that runs just east of the property, will also be improved once OSI constructs a trail and parking lot on nearby Arden Valley Road.

The “Harriman Connection” property links a 4-mile network of carriage roads and trails, protected by OSI in 2017, and makes it more easily available for public use and enjoyment. Originally owned by the Harriman family, the carriage roads wind their way eastward over stone culverts and waterfalls though Harriman State Park.

“Improving access to New York’s public lands is at the core of OSI’s parks work,” said Kim Elliman, OSI’s president and CEO.  ““The addition of this property will make the park more easily accessible through mass transit and while expanding recreation opportunities for park visitors. We applaud the New York State Office of Parks for their continuing commitment to improving our public lands public enjoyment.”

“State Parks offer some of the best places to explore and discover New York’s great outdoors and I am thrilled with our efforts in improving and expanding accessibility into our parks,” said Office of Parks, Recreation and Historic Preservation Commissioner Rose Harvey. “The addition of the Harriman Connection property will provide a vital link in connecting families and visitors with the countless camping, swimming, hiking and fishing opportunities that Harriman State Park provides.”

The area is currently a scenic favorite for many long-distance hikers traveling on the Long Path, maintained by the New York-New Jersey Trail Conference (NYNJTC), which extends 357 miles from the 175th Street Subway Station in New York City to John Boyd Thacher State Park near Albany.

The Open Space Institute’s protection of the “Harriman Connection” property builds on its dedication to the Harriman lands, and to the greater Hudson Highlands region itself — a resilient band of mountainous terrain stretching from eastern Pennsylvania to northwest Connecticut.

Adjacent to the newly acquired Harriman Connection property is the 625-acre “K.H.M.” property containing the carriage roads. OSI acquired this property in 2017, before transferring it to the Palisades Interstate Park Commission (PIPC), as another addition to Harriman State Park.

Looking ahead, OSI plans to transfer the Harriman Eastern Access property to (PIPC) by December 2018.

Adjacent to the Harriman Connection property, OSI also acquired 64 acres. OSI has a contract to sell this acreage to a private buyer that will keep the land protected through a conservation easement. With support from the Lila and Dewitt Wallace fund for the Hudson Highlands, OSI has committed over $70 million in transactions and itself invested $20 million in this area over a span of 20 years, protecting 25,000 of the 80,000 acres of state parks in the region which include Sterling Forest, Harriman, Bear Mountain, Goosepond Mountain, Schunnemunk Mountain and Storm King State Parks.